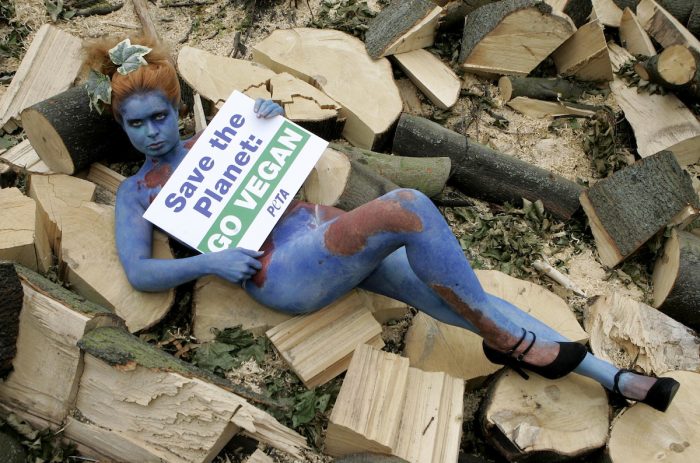 NO MEAT AND TWO VEG (Laura)

Came across this rather funny story in the Metro this morning about animal rights charity Peta who have come under fire for issuing a video which is said to glamorise domestic violence.

The 30 second clip shows Jessica walking down the street in a neck brace and the narrator informs us that she is suffering from BWVAKTBOOM otherwise known as ‘boyfriend went vegan and knocked the bottom out of me’ developing the energy of a tantric porn star after going vegan. It’s a brilliant tongue in cheek advert and is clearly designed to appeal to a young men and women who may not be aware of the benefits of switching to a meat free diet. But some viewers have failed to see the clips funny side and women’s rights charities have taken to social media to vent that the ad make domestic violence glamorous. Either way the video has caused a storm in media across the world and as a result it has received nearly 1.8million views on YouTube – which can’t be bad! Wonder if we will see a rush in the vegetable aisle of Tesco as a result?
http://www.metro.co.uk/news/890582-peta-rough-sex-vegan-ad-sparks-anger-for-glamorising-violence

We all go through childhood blissfully believing in things that are a lot of the time not real. Santa Clause, the Easter bunny and the tooth fairy to name a few. But there are a few things we are taught to believe and then we realise it was all a fantasy. It’s actually very interesting to point out that Humpty Dumpty was never ever called an egg in the nursery rhyme so how did we all come to this conclusion? Also one of my favourite childhood cartoons Hey Arnold was never actually wearing a kilt as they said it was indeed a very long shirt. I think it’s better not to know these things; I’ve started to question my whole belief system…
http://www.buzzfeed.com/daves4/13-things-about-your-childhood-you-never-realized

THE MOUSE THAT ROARED – AND THE PR FALLOUT (Scott)

As a fussy diner, I’m unlikely to try out a restaurant which has been carpeted by health inspectors over hygiene breaches, particularly rodent droppings.
News of such a transgression would be a PR disaster for any restaurant -but when it is amplified because of that eaterie’s association with celebrity chef Gordon Ramsay it could leave a hard earned-reputation in ruins.
Normally I’d take a hardline on this kind of thing. Hygiene isn’t a hoped-for bolt on in a restaurant, it is a fundamental which has to come all the way from the top. Which means it’s celebrated dumpling specialist Chop Chop should be straight to the top of my Nixed List.
Yet, I was impressed by the positive response from manager Roy King when confronted. I don’t know if his PR advisers created this response, or if it came straight from the man himself. But it shows a classic crisis response: acknowledge the problem, show contrition, demonstrate improvement and move on. On the back of this, maybe I won’t automatically give his restaurant the chop. He’s just earned an unlikely second chance from this diner.
http://www.dailyrecord.co.uk/news/scottish-news/2012/02/11/mouse-droppings-found-at-restaurant-praised-by-scots-chef-gordon-ramsay-86908-23743835/

You should give yourself a laugh every day but seeing as it’s Friday and spirits are high I thought I’d inject some entertainment into your day with Kevin Bridges.
The Scottish stand-up comedian offers his take on what he knows best-the highs of life in Scotland in the form of Weedgie Davie who’s laden with six bairns.
Good old Scottish comedy, the best at taking a hit at ourselves for comedy’s sake!
http://www.youtube.com/watch?v=wdsuShabEx8

Starbucks is one of the most successful companies today and is often used as a model for aspiring small businesses. It has grown from a single coffee shop in Seattle 33 years ago to a $4.1 billion international company.
I do enjoy the odd Skinny Caramel Latte but overall I find the chain overpriced and faddy, but the following story caught my eye today!
A blogger in the US armed with a free drink coupon marched along to his local Starbucks to challenge them to create the most expensive drink possible.
He chose the largest size, Trenta, which holds just shy of a litre of coffee (only available in the US) and proceeded to fill it with a whopping 16 shots of expresso, a shot of soya milk, caramel syrup, bannana puree, strawberry puree, vanilla beans, Matcha powder, protein powder and a drizzle of mocha flavouring.
The price of this monstorous coffee-$23.60-and if he was to consume two of these, possibly his life due to the terrifying amount of caffeine.
http://nacgeek.wordpress.com/2012/-2/14/23-60-the-most-expensive-starbucks-drink-possible-in-the-world/

Or if you want your business, product or venture to earn amazing headlines of their own then contact our talented PR team on 0131 561 2244 and find out about our brilliant and cost-effective services, including PR video.

Alterantively, take a few seconds to fill and submit the simple form below and we’ll get straight back to you: