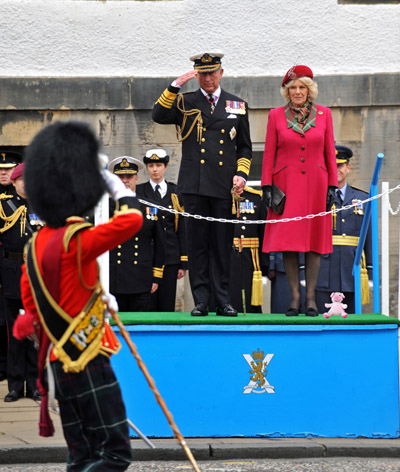 This week I continued to travel the country with Deadline News photographer, Duncan Simpson and I must say I was a very spoiled little piggy.

Duncan was sent to photograph a recent Armed Forces Parade and he took me along to assist.  I even got to meet royalty!

Although I didn’t actually get a formal introduction (as much as the photo to the left would seem to suggest) I did get to hear Prince Charles and the Duchess of Rothesay address the crowds. It was very exciting for me after being cooped up in the Holyrood PR and Deadline News office for such a long time. I’m definitely enjoying my new lease of life.

Members of all services in Scotland, from the Navy, the Scots Guards, The Royal Regiment of Scotland and the Royal Air Force were joined by veterans from the Royal British Legion of Scotland and Prince Charles and Camilla, the Duchess of Rothesay at a parade to celebrate Her Majesty the Queen’s Diamond Jubilee.

On the way to the photocall Duncan informed me that the Queen’s Diamond Jubilee marks the 60th anniversary of her coronation and that on Tuesday 5th June everyone will join in with the celebrations by hosting garden parties with tea and cake and attending any one of the vast number of other events that are happening. See here to check out celebratory events from across the country.

I’m certainly learning the tools of the trade by working alongside Duncan. I couldn’t think of anyone better to teach me the ins and outs of great photography. If you don’t believe me, take a look at his photography here. Duncan is a highly skilled photographer having taken photos across the globe before returning to Edinburgh to join the Deadline News team.

Oh, Duncan is pointing at his watch with a disapproving look on his face – must mean we have another exciting photocall to attend and I’m holding us up. Best dash.

If you have any thoughts on what you would like to see me get up to over the next few weeks let the team know by contacting us on Twitter or Facebook.