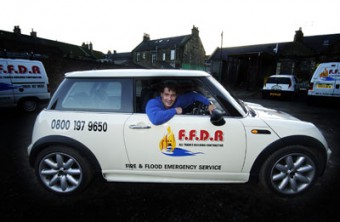 FFDR, Scotland’s small business of the year, is to introduce compulsory breath tests for its fleet of drivers.

FFDR, the all trades construction firm which specialises in salvaging damaged properties on behalf of the insurance industry, says the move will reinforce its reputation for excellent customer service and further raise safety standards among its 60-strong workforce who now cover more than a million miles every year.

At the start of each day, workers will be chosen at random to undergo a breathalyser test using approved equipment.

Ronnie Klos, founder and sole director of FFDR, which was named Best Small Business at the most recent National Business Awards of Scotland, said staff and customers will all feel the benefit from the innovative measure.

He said: “We have around 50 vehicles on the road every day and safety is our number one priority. Anyone under the influence of alcohol is a danger not just to themselves, but to colleagues, customers and other road users.

“Every employer knows the problems of trying to get staff to act and behave in a responsible way.  I know the vast majority of our staff are hugely responsible and sensible, but it only takes one idiot to get behind the wheel while they are over the limit, cause an accident, and the firm’s reputation would be ruined.”

FFDR operates a fleet of 55 vans covering across Edinburgh, Fife and the east central Scotland area from its base in Lochgelly.

Caused a few eyebrows to be raised

Mr Klos said: “The fleet of vans are the lifeblood of this business, so every single one of the 60 people we employ is dependent on them for their jobs. We simply won’t tolerate having that jeopardised by the rash actions of any individual.

“The staff are right behind this scheme because they know they have absolutely nothing to fear from it. It also brings added reassurance for our customers that the people turning up to carry out work at their homes are fit for the job.”

“I know this is a bold step and one that may raise a few eyebrows, but if we can guarantee that at any one time all our employees are not breaking the law by driving while over the limit, I am well prepared to defend my decision.”

Not worth the risk of a destroyed reputation

Among the workers happy to take the regular breath tests is joiner Joe McGuirk, 43, who said: “I totally agree with the testing.  In the type of work we’re in all it takes is one person to get caught and that’s the reputation of the company destroyed.  Having worked for FFDR for nearly four years I was a bit surprised when the management suggested it, but I’ve heard of a few big companies who carry out daily breath testing and it becomes routine.”

FFDR, which was established in June 1998, prides itself on improving the image of the construction trade.

All staff wear a smart uniform and the company employs a sophisticated software system to chart the progress of repair work.  The company is also able to offer customers an unrivalled service where all jobs are mapped out in advance, with times worked out on when a specific tradesman will visit and when the work will be completed.   In addition, the company vans are fitted with a hi-tech satellite tracking system, which allows their movements to be plotted at all times

The innovative approaches have made the company a favourite with loss adjustors and insurers and FFDR is now a preferred contractor for a number of the country’s top insurance companies.

That has helped the company enjoy year-on-year growth and seen the workforce grow from the initial team of five to 60.