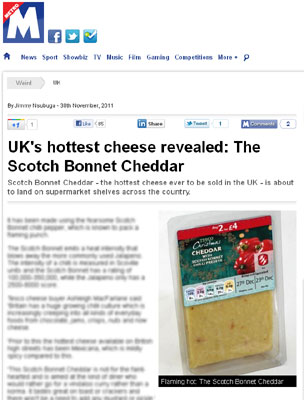 CHEESE TO WARM YOUR COCKLES (Gaynor)

As it continues to get colder and the snow looms you may be looking for something warming. If cheese is your thing then this is for you. Something is about to land on the shelves which may even be too hot to handle. The scotch bonnet which is about to be unleashed by Tesco for Christmas is the hottest cheese to be sold in the UK. With the rating of 100,000-350000 it’s hotter than the measly Jalapeno which is only a 2500-8000. I think you’d have to be a bit nuts to try it!
http://www.metro.co.uk/weird/883410-uks-hottest-cheese-revealed-the-scotch-bonnet-cheddar

I’m always fascinated whenever unexploded World War II era bombs get discovered. You tend to get a few cases every year when some poor, unsuspecting soul finds one in their back garden and it rightfully causes a major freak-out among the surrounding population. For the citizens of Koblenz in Germany, however, the discovery of two long-forgotten bombs this week has been even more of a scare than usual – as the city’s entire 100,000-strong population were forced to clear their homes while bomb experts diffused it. The mega-evacuation was the biggest on record and, considering the bomb could have spewed more than a tonne of shrapnel throughout the area, probably justified. Check the video out to see more.
http://www.guardian.co.uk/world/video/2011/dec/05/second-world-war-bomb-germany-video?newsfeed=true

One of my male friends brought this video to my attention this weekend – mainly because he was suffering from Man Flu at the time – and it gave me a good giggle. Man Flu has spread over the past few years and this video shows the devastating effects that man flu can have on a family – including a red nose, tiredness and to being within seconds from death. Obviously this video posted on YouTube is a satire on something which has become a common diagnosis for the sniffles, but the way it has been put together is pretty funny! We are introduced to Joe and Mary who tell their tale of how Joe nearly lost his life at the hands of the dreaded man flu. The exaggerations are even funnier partly because they are a true reflection of the way men behave when their suffering from man flu – like it’s the end of the world. My favourite part is when he compares it to child birth! I tell you what though I am sure glad that we ladies are unable to get the man flu – we’d never survive!
http://www.youtube.com/watch?feature=player_embedded&v=6keUdzwFCHU

TIL DEATH DO US PART AT THE TIGHT ROPE WEDDING (Aimee)

I can’t draw on my personal experience- but marriage can be a pretty stressful event even without a large dosage of cold feet.  But it seems the typical love fuelled ceremony wasn’t enough for this couple who decided to challenge the routine by getting married on a tight rope.  There was no net and the vicar climbs up a fireman’s ladder which is unbelievably brave and would not have been allowed in our safety conscious society.  Filmed in Toulouse, France the date of this video is unknown but I’d place it around the 1940s and I applaud their originality and bravery during this mean feat.
http://www.youtube.com/watch?v=gnhP-a15mxY

Christmas fever is hitting our city with early decorations being put up in houses, the Winter Wonderland is on show in Princes Street and now we have some snow. It’s all so festive and cheery…right? Wrong? The massive downside to Christmas is Edinburgh is trying to take your car anywhere near town and trying to find a parking space. This video is a couple of years old but I only stumbled across this the other night. I think the guys at Radio Forth have hit the nail on the head with this song about the troubles of trying to park in the city centre near Christmas.
http://www.youtube.com/watch?v=CPijTwIMwhU