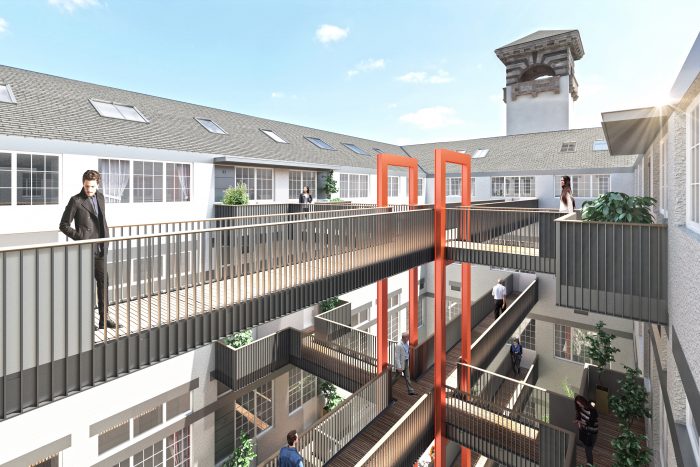 FRESH proposals to breathe new life into one of Edinburgh’s most distinctive old school buildings have been submitted for approval.

Plans for the sympathetic restoration of the former Boroughmuir High School had been revisited prior to a community event as developer CALA Homes took on board a range of comments from the previous application last year.

The new designs have seen the new-build block of affordable homes be reduced by a level, along with a reduction in the scale and mass of the proposed building.  Further amendments include the alignment with the height and windows of the neighbouring tenement.

To reflect surrounding architecture, the new designs have been paired with a change to chosen building materials, with the use of natural atone and slate resulting in a subtle building that preserves the character of the conservation area.

The carefully considered refurbishment of the Main School building remains relatively unchanged after it was widely praised by planners for its community focussed approach encapsulated within the designs for the central courtyard.

Following a positive turnout of more than 140 neighbouring residents at a recent event at Morningside’s Eric Liddell Centre to learn more about the new proposals, constructive feedback has enabled the developer to take on board further changes.

These include the addition of visitor bike storage areas, bike cleaning facilities, additional tree retention and also a commitment to provide every resident within the development an annual bus pass to promote the use of public transport in the well-connected area.

95% of the development will have allocated parking spaces onsite which will not allow them to access a parking permit on-street. 14 additional spaces will be created on Viewforth which will be able to be used for City Car Club, additional Permit Spaces and Pay & Display to ensure a net benefit to the wider area.

Gavin Pope, Land Director with CALA Homes (East), said: “It was especially important to us that we go back to the community following the changes to our previous plans. To that end we thank those that attended the event for their time and comments.

“Comments throughout the day were very useful and we’ve been able to take on board a range of suggestions before we submitted the final application.

“It goes to show the importance of these events in creating a development that works for the surrounding area while delivering much needed homes.

“While we appreciate that no development will be universally popular, what was especially pleasing was that many local residents were positive about the changes to the new build aspect – and actively wanting to see the vacant school building returned to life.”

Within the heart of the school building will remain an open courtyard with a series of walkways, along with the stunning conversion of classrooms into 87 split-level mezzanine apartments.

Pupils from the school in Viewforth moved into the £35m purpose-built new campus earlier in the year and City of Edinburgh Council has again agreed terms to sell the Category-B Listed building to CALA Homes, which has its national headquarters in the city.

The proposals will be considered at a planning committee meeting later this year and if approved, work could commence on site by early 2019.

CALA Homes is headquartered in Edinburgh and employs more than 850 people and earned its reputation on the high quality of the homes it builds, which are sensitively designed to augment the areas in which they are located.

If you’re interested in discovering what our excellent Property PR team have to offer, please get in touch on 0131 561 2244 or by using the contact form below: