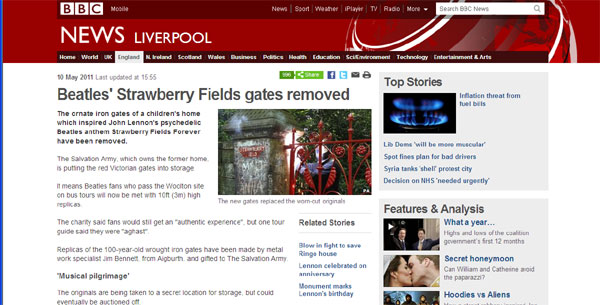 If you think you’ve got a link that trumps ours in the wow factor stakes, then why not recommend one via our twitter or facebook pages? As ever feel free to comment on any of the links provided!

If it wasn’t for the clock in the foreground, I’d be convinced this video involved a bit of trickery. Even for a nation reared on the speedy art antics of chipper Antipodean fella Rolf Harris, this is something special. The speed with which this artist creates his space age pyramid against an alien skyline is astonishing. Or as Rolf might have said: “Can you guess what it is yet?”

TEACHERS GET DOWN WITH THE KIDS (Laura)

Faculty at a school in Fife have given pupils a send off to remember after performing a flash mob dance to the YMCA. Started by the principal of Bell Baxter High School, over 40 staff members joined in to perform the flash mob which has been immortalised on You Tube. Whilst not only great for improving staff student relationships and shows just how ‘cool’ the teachers are, the video has had a massive 33,000 views so far and has hit headlines even as far a field as Belfast making it a piece of PR magic. Check out the video in the article below and keep your eye out for the snazzy moves!

MY PANTS FOUGHT THE LAW – AND THE LAW WON (Adrian)

While low-slung, baggy jeans may be the uniform of choice for many teenagers the world over, it seems that some adults have finally had enough of the fashion. Law-makers in Florida have passed a bill in the senate banning school kids from wearing their jeans too low – as they believe it is inappropriate dress for the classroom and a disruptive influence on other pupils. Some supporters of the ban also believe that the hip hop fashion of low-slung pants goes against Florida’s moral obligations to be pro-family, pro-education and pro-jobs. Now I’m pretty sure that wearing your trousers below your buttocks doesn’t automatically makes you a Cristal-swigging, ho-slapping gangsta who’d rather bust some rhymes and cap a homie than do their homework. However, it does make you look like a tool – which is probably a much better reason for Florida parents to implement a ban.

The gates of a children’s home that inspired John Lennon to write “Strawberry Fields Forever” have been put into storage. The Salvation Army has removed the Victorian gates in Woolton and will replace them with replicas. On one hand, it’s good that they are being preserved and apparently they may be auctioned one day, but on the other hand, isn’t the whole point of landmarks being able to see the original? If it means paying to maintain them and keep them in a good state, I’m sure there are millions of fans who would agree to putting something towards their upkeep.

BLOW YOUR MIND WITH THE WORLD’S WEIRDEST FACTS (Scott)

The online Q&A service Quora splits opinion – overhyped and overvalued tech start up, or groundbreaking and highly valuable repository of expertise. Whatever your view, threads like this one are genuinely informative, entertaining and, well … mind blowing. From the terminal velocity of small animals to the timeline between tyrannosaurus and stegosaurus, you could spend hours with these nuggets of information. Are they all ‘facts’? Better ask Quora.