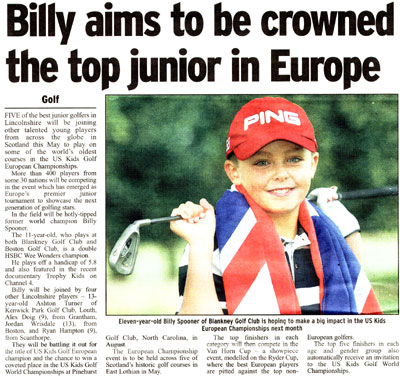 The Sleaford Standard has featured young golfer Billy Spooner and four other Lincolnshire youngsters as they prepare for the 2009 U.S. Kids Golf European Championships.

The press coverage comes as the five golfers ready themselves to take on more than 400 of the world’s top youngsters from 38 countries across the globe at the prestigious event in East Lothian, Scotland this month.

The coverage appeared on the back of a media campaign by Holyrood PR.

The full article can be read on the Sleaford Standard’s website here or by visiting http://www.sleafordstandard.co.uk/sport/Billy-aims-to-be-top.5213752.jp