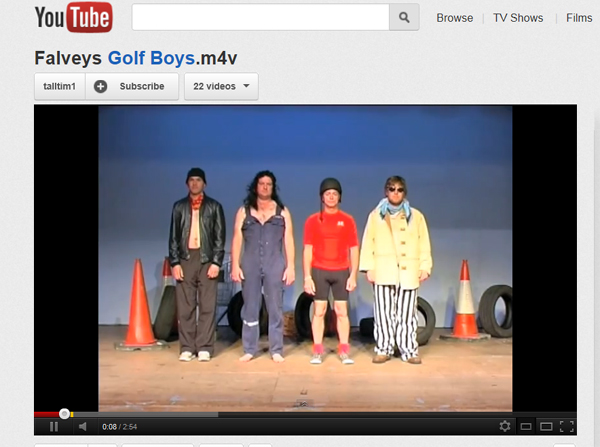 A group of lads from Kerry have given the PGA big boys a run for their money remaking the recent you tube hit Golf Boys, which features golfing stars such as Rickie Fowler and Bubba Crane try their hand at the pop chart. The four likely lads don the costumes and create a near perfect replica of the music video, even adding their own personal touch showing the group relaxing with a hard earned pint of Guiness afterwards. The lads are part of the Falvey’s (a pub in Killorglin rural Ireland) golf club and thanks to the success of the music video which has attracted over 2,000 views in just under 2 weeks the little known pub is sure to become a lot more famous. The lads have also made a hilarious blooper video, which you can watch afterwards – probably even better than remake clip!
http://www.youtube.com/watch?v=6VE3Fbad3Aw

THE WHEELS ON THE BUS (Emma)

Campaigns for a local election in Canada’s province of Alberta are currently in full swing. Plastering posters and sending out flyers of candidates in an attempt to promote them is nothing new, but this tactic is something you don’t see every day. Danielle Smith, of the Wildrose Party is now appearing on the side of a bus. However, it just so happens that her head is perfectly positioned above the wheels, making them look like something else. Residents have taken to Twitter to share the image of the bus and the photo has now gone global. Whether it was on purpose or not, it’s certainly got people talking about the candidate which could work in her favour come the election.
http://www.prdaily.com/Main/Articles/11156.aspx

Bit late for jumping on the Angry Birds game wagon but it ain’t half addictive.Check out this guys genius creation of making the game playable with an actual slingshot through hacking together electronics, software, microcontrollers and carpentry. Immense! http://www.youtube.com/watch?feature=player_embedded&v=a97bWORY4Og

Frantic shoppers have been rushing out to the shops to buy jars of Marmite. The Marmite factories were destroyed in the Christchurch earthquakes last year, which brought production to a halt. Manufacturers say they will dispatch the last remaining supplies this week. Shops are rapidly running out of the stuff, which the Kiwis apparently can’t get enough of. Someone has even put a jar of Marmite up on an online auction site with bids starting at £2,000. They say you either love it or hate it, but in NZ it’s clear they absolutely love it and it’s been reported that they get through 640 tonnes of the paste every year.
http://www.metro.co.uk/weird/893676-marmageddon-panic-buying-in-new-zealand-as-marmite-supplies-runs-low

Over the last few months I have found a new appreciation for coca cola and have found myself drinking it quite frequently. At the weekend the boyfriend and I indulged in the fizzy treat after buying the original glass bottles of coke which were an absolute treat. If you’re like me and love the drink of happiness you will be glad to know the super brand is launching a new 375ml bottle, perfect size to fit in your pocket. I suppose I will have to try it out….
http://www.marketingmagazine.co.uk/news/1122934/Coke-launches-first-new-bottle-size-almost-20-years/