Best Links From The 4th Of July 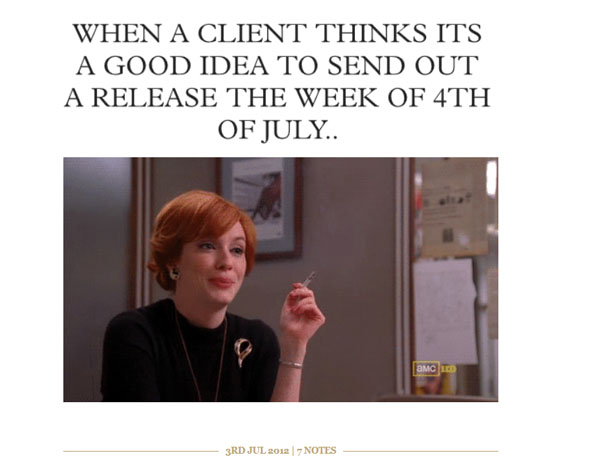 99 PROBLEMS BUT A PITCH AIN’T ONE (Victoria)

Everyone suffers from the mid week blues from time to time, as I did this morning – but my mood was quickly lifted when I came across a HILARIOUS blog.
Really only relevant for those in the PR industry, the Tumblr blog ’99 Problems But A Pitch Ain’t One’ addresses the common problems we regularly face in our profession using animations and humour.
I have trawled through the archive and my stomach muscles now ache from my incessant laughing!
Can you relate to these PR problems?http://twitter.com/PitchAintOne
http://99problemsbutapitchaintone.tumblr.com/

Along with the meerkats Mr Gio Compario has become one the most annoying people on TV. Featured on the ‘Go Compare’ ads the stupid looking opera singer has finally been given his last rights on the advert .After becoming so annoying to the British public that they literally hate him, the ad makers have had him killed off by  Sue Barker- fairly random. Hopefully that will be the last we see of the curly haired man, I have a feeling that might not be the case!
http://www.dailymail.co.uk/news/article-2168317/Final-curtain-irritating-Go-Compare-opera-singer-Gio-Compario-killed-Wimbledon-presenter-Sue-Barker-companys-latest-advert.html

The world has been abuzz about this book 50 Shades of Grey-Everybody has recommended it to me from my cousins to my mother’s friends. But now the best selling romance has been located as the cause for a spike of pregnancies according to expert anthropologists. Its steamy scenes have inspired hundreds of women to seek out more frequent intimate moments with their partners, and pregnancies have soared! Women on pregnancy websites seem fairly vocal about their 50 shades babies, and many openly thank the author for the newest editions to their family.  Can you imagine explaining that to the kid later on in life?
http://uk.lifestyle.yahoo.com/50-shades-of-grey-baby-boom-expected.html​

DO YOU KNOW A ‘NEAR PSYCHOPATH’ ? (Aimee)

Turns out chances are you might know someone who is almost a psychopath according to a new book!It seems these near mentals who enjoy wreaking havoc in other’s lives are slipping under the psycho radar meaning they’re  free to get off on pulling fast ones!But don’t worry because only 1 percent are classified as true psychopaths!http://abcnews.go.com/Health/psychopath-book-ids-subclinical-lying-manipulating-callous-behavior/story?id=16598607#.T-EISBdYvm

Something I have to admit never having considered was whether women or men most commonly use different social networking sites. However, I was enlighten by an article on mashable.com which describes a division between LinkedIn and Google+ as male dominated social media outlets and Twitter and Facebook which are used most frequently by women. Apparently 63% of LinkedIn users and nearly two thirds of Google+ users are men whereas women are the most likely to post of Facebook and Twitter. As a female Facebook and Twitter user who is only just getting to grips with Google+ and LinkedIn these findings would seem to ring somewhat true… http://mashable.com/2012/07/04/men-women-social-media/​

Comments Off on Mackie’s collaboration is a social media hit

Comments Off on Time flies when you’re having fun: Learning PR in Edinburgh sees four weeks pass in a flash

Comments Off on Mackie’s collaboration is a social media hit

Comments Off on Time flies when you’re having fun: Learning PR in Edinburgh sees four weeks pass in a flash