Bell Ingram To Paint A Picture Of Success At Game Fair

on behalf of Bell Ingram 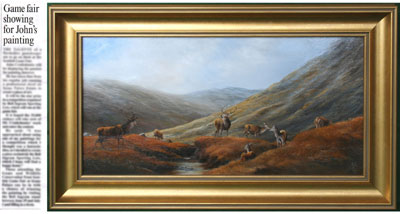 Bell Ingram Sporting Lets grabbed some headlines in The Courier today with news of an exclusive competition to be launched at Scone Palace for Scotland’s biggest game fair.

The competition will showcase the artistic talents of gamekeeper John Cruikshanks who has painted a one off piece for the 24th Game and Wildlife Conservation Trust Scottish Game Fair at Scone Palace.

John splits his time between his passion for oil painting and running a professional shoot on Scone Palace Estate and it is hoped that the 35,000 will be impressed by his latest offering and enter the competition.

John said: “I was approached about using one of my paintings for a competition which I thought was a fantastic idea so I decided to create a piece exclusively for Bell Ingram Sporting Lets which I hope will find a happy home.”

The full coverage was received in The Courier and was achieved on behalf of Bell Ingram thanks to an ongoing PR campaign with Holyrood PR.