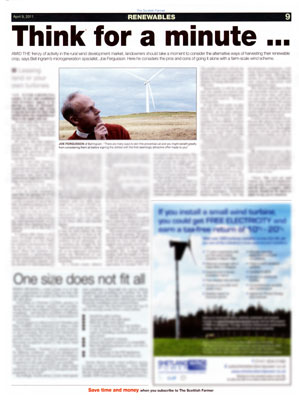 Scotland’s leading land agent has been featured in a nationwide publication after one of its microgeneration experts provided advice on a farm-scale wind scheme.

Under the headline “Think for a minute…” the article covers a wide range of advantages and disadvantages of the scheme, which has become increasingly popular amongst landowners across the UK.

As the author of the piece, Joe explains: “An ever growing number of new an established wind developers appear to be playing a game of Monopoly around the nation’s hills, trying to bag the best sites for their wind turbines before the competition get them or the supply runs out.

“The deals they offer landowners are very enticing, involving big money for nothing except allowing access and then doing nothing to affect the wind flows for the next 30 years.”

Bell Ingram is best known for managing 500,000 hectares of land across the UK but its green energy specialists have already advised on hundreds of potential renewable projects.

The company has built a respected and trusted name in rural land and property matters since the firm was established in Perth 112 years ago.

The article in Scottish Farmer was secured as part of a sustained PR campaign carried out by public relations agency Holyrood PR.