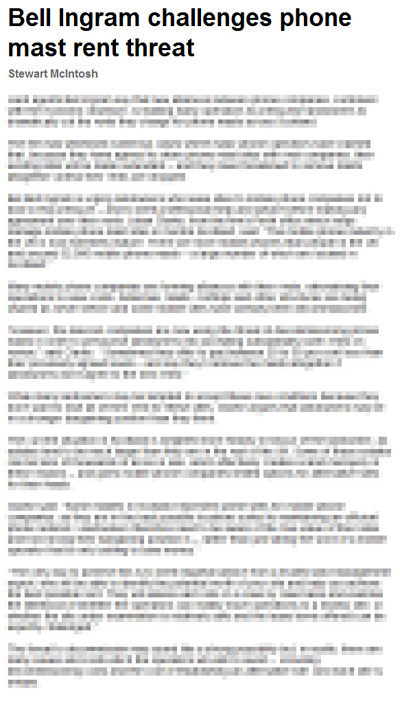 Excellent PR in Scotland for Bell Ingram with Business press

One of Scotland’s busiest land agents has been discussing how the new alliances between phone companies paired with the economic downturn has lead to many landowners coming under pressure over the rents of their phone masts.

Bell Ingram has been urging landowners not to bow down to the of demands of phone companies who rent their sites for phone masts. The land experts has been telling land owners to seek professional help and advice before making any agreement over rents.

Julian Clarke, an associate at the firms Perth office said “The mobile phone industry in the UK is now extremely mature. There are more mobile phones than people in the UK and around 52,000 mobile phone masts- a large number of which are located in Scotland.

He added “Some estates in Scotland represent prime sites for mobile phone companies, as they are in the best possible locations suited to maintaining an efficient phone network. Landowners therefore need to be aware of the true value of their sites and how strong their bargaining position is- rather than just taking the word of a mobile operator that is only looking to save money.”

This coverage was secured with Comprop Scotland as part of a sustained public relations campaign carried out by Holyrood PR on behalf of Bell Ingram.