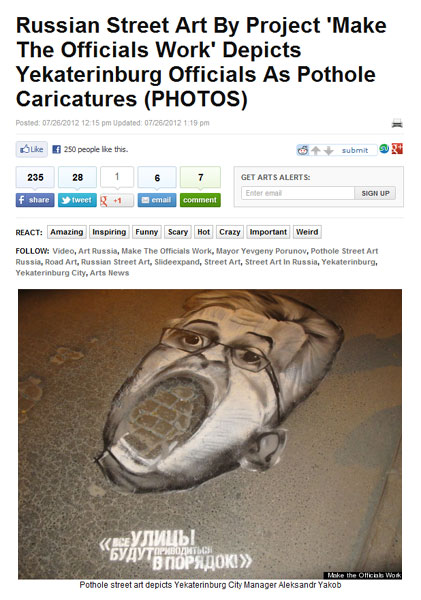 If you liked our links, let us know on our Facebook and Twitter pages or better still, leak us a story worth shouting about!!!

If we think the potholes on Scottish roads are bad, then spare a thought for residents of the Russian city of Yekaterinberg.Their roads are in such a bad state, that activists made a last ditch attempt to prompt the authorities to carry out the much needed repairs, by painting open mouthed faces of the city’s top officials including the mayor and the governor around the many potholes.The project has been a social media sensation and has enraged the portrayed public figures in true Putin-state style, with an official statement deeming them, “unsanctioned and inappropriate pictures that pollute the city.”Victory was achieved, as less than 24 hours after the potholes were painted, work crews had both removed the paintings and repaired the trouble spots!Watch a time lapse video of the potholes before the paintings and after, you can see how effective they are!
http://www.youtube.com/watch?v=6ukunpaCipU&feature=player_embedded

A new BBC Three comedy is set to hit our screens with a teaser clip being released to give us all a taste!The Revolution Will Be Televised takes a satirical look at our culture with the first victims being the Royal Family as a Jubilee Salesman takes to the streets selling goods like Prince Harry DNA tests and a Pippa Middleton social climbing ladder! Brilliant!I think this show could be worth a pop.
http://www.youtube.com/watch?v=ltLofZnDE8o

Twitter Doghouse is the latest app designed to help you keep your sanity during the Olympics – if you are sick of constant sporting updates that is. Created by developers Elan Dubrofsky and Jure Stern in response to a challenge posted on the crowdsourcing development platform CloudSpokes, this app lets users unfollow teweeps for scheduled periods of time. Perfect for those non-sports fans following those who have revealed themselves to be Olympic nuts! When you give someone the cold shoulder you can keep it secret or send an automated teasing tweet their way. Or, you can tweet to @TwitDoghouse to publicly request service. Let us know if this is a tool you have found useful since London 2012 kicked off on Friday!
http://mashable.com/2012/07/29/twitter-doghouse/​

PEOPLE WHO JUST HAD SEX (Aimee)

Vice fans out there, I’ll get my appolgy in there quickly but I think those behind the magazine think they’re just a bit too cool for school and make attempts at creating the shock factor look over thought and desperate! So on that note I bring you its latest offering-a video project called ‘People Who Just Had Sex Show.’It is exactly what it sounds like, Vice journos enter the bedrooms of couples who have just got down to open up the taboo subject of sexuality. I’m no prude but I certainly don’t need to see other sweaty people talking about girating and getting your a** eaten to make me feel easier about talking about sex!See what you think…
http://www.trendhunter.com/trends/vice-people-who-just-has-sex-show

It seems the Scots battered Mars bar creation could be upheld as having a similar status to Champagne if a rather bonkers Euro bid succeeds. The Carron Fish Bar, where the delicacy was invented, has applied for it to be sheltered under the EU’s Protected Food Name Scheme. Bosses want it named Stonehaven Deep-Fried Mars Bar after its home town in Aberdeenshire-watch this space!
http://www.thescottishsun.co.uk/scotsol/homepage/news/4462218/Battered-Mars-like-best-fizz.html