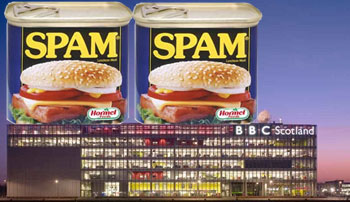 BBC Scotland staff will be loving their boss Atholl Duncan after his appearance at a Gorkana Breakfast Briefing this morning in Edinburgh and he told the 50-plus gathering of PRs that the best way to ensure your story appears in the BBC is to contact as many members of BBC staff as possible.

Holyrood PR Edinburgh PR Supremo Scott Douglas will be along shortly to blog about the whole event but I can just see the champagne being popped over at Pacific Quay with the news that they are set to be receiving even more press releases. Not. In an age when most journalists are moaning about the number of press releases they get, the news that they are about to get more won’t go down too well.

Now for most it actually shouldn’t be a problem as sensible PR people will only contact the relevant reporters and staff (and I’m sure Gorkana will be hoping people use their service to find them), but for others it will no doubt be email hell, followed up by that most amateur of PR actions:  the ‘did you get my email’ phone call. (seriously people, if you want to make sure they got it, turn on ‘delivered’ and ‘read’ receipts in your email) which is just going to lead to some BBC staff getting really hacked off with PRs, souring the whole relationship. There’s also a danger that rookie PR operators think ‘well if we send a release to everyone at the BBC, let’s send it to everyone at every publication’ which then leads to everyone being hacked off.

To be fair to Atholl, it’s a fair, basic and decent point he makes – you want exposure, you get in touch with lots of people across the multiple BBC services and shows. But if experience has shown us anything, it’s that someone will take a kind offer and take it too far. And how long will it be before people start trying to reach Atholl with releases on his numerous web2.0 sites (he’s fairly savvy with a presence on Twitter, Facebook and LinkedIn).

Of course, if the BBC really wanted people to get in touch, how about providing contact details with each bylined story on the BBC News website?