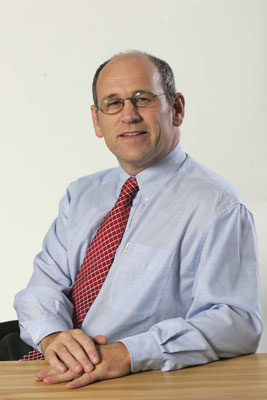 Any presentation by Atholl Duncan, head of news and current affairs at BBC Scotland, is a must see.

And so it proved today, when a bumper crop of Scottish PR people gathered in Edinburgh (including a couple of us from Holyrood PR) out to hear Mr Duncan’s views on the future of Auntie, part of a Gorkana breakfast event in the city.

They weren’t disappointed. For a man who’s spent most of his career in the broadcasting backrooms, he is perfectly comfortable and relaxed in front of an audience.

In typical Beeb style he quickly and adeptly led the 100-plus assemble flacks, comms people and public affairs types through the history of Scottish news broadcasting, the current state of Scotland’s media and the future in an online world.

I feared the worst when he opened his presentation with a grainy photo of a woman from yesteryear feeding a penguin and asked who could name her. There was a loooong silence, before someone rode to the rescue by correctly identifying Mary Marquis.

However, I might have been the only person guffawing loudly when Atholl then went on to describe the icon of Scottish TV news in the 70s as  the “Scottish Angela Ripon of her generation”. Bless.

Highpoint of the presentation was a very slick (as you’d expect) two minute PR video of memorable moments from the news schedule during 50 years of Reporting Scotland.

However, it wasn’t all gooey, memory lane stuff. While newspapers are struggling to survive the first era of the digital age thanks to the collapse of advertising revenues, the Beeb is also having to meet its own challenges.

Most notably a generation of broadcasters (on board the telly equivalent of a very difficult-to-turn oil tanker) are having to accept that TV news is on the wane. The flag round which they have rallied their entire career is suddenly looking a bit tattered.

Credit to Atholl. He’s a Reporting Scotland man through and through – yet he didn’t flinch from addressing the figures which show the programmes ageing viewers are fast disappearing.

However, unlike newspapers, the Beeb can look to its enormous online audience – most of whom are under 35 – with some sense of relief because (unlike papers) they don’t have to solve the conundrum of the online news age: how to raise advertising revenue online.

Strangely nobody thought to ask Atholl (ably supported by BBC Scotland’s business correspondent, Douglas Fraser, formerly of the Herald and Sunday Herald) how the Beeb would carry on delivering this exemplary TV, radio and online service if the licence fee is ever pulled.

The question never even came up when Douglas Fraser warned that the UK’s £700 billion public debt will bring carnage to the public sector for years, if not decades, to come.

BBC boss’s message to those in PR in Scotland

Yet, you have to wonder how safe the licence fee will be when David Cameron’s Tory government (or maybe even Government’s beyond that) has to justify swingeing cuts in the public purse. At that point a state subsidised broadcaster will look like an awfy tempting sacrificial lamb, I’ll wager.

However, there were a few difficult questions fired at the Men from Auntie. Notably, some wag asked what chance there is that the Scottish Six O’Clock news will ever come to be.

That is a subject which has fascinated the print media for more than a decade and it’s been a favourite will-they-won’t-they debate in the press throughout that time.

Atholl didn’t exactly kill it stone dead. But he was pretty clear that the phenomenal success of the iPlayer means scheduled TV will falter to be replaced by on-demand services. Not much room to create a new scheduled TV news programme then.

The BBC gaffer was also diplomatic when asked what were the chances of viewers getting a dedicated Scottish news channel? He seemed pretty sure that, as digital media forces down broadcast overheads, this will become a reality, thought admitted: “It won’t necessarily involve the BBC.”

So what were the main pointers for the assembled ranks of  PR in Edinburgh?

Atholl advised that to get their stories used, PRs should pursue “multiple entry points” into the BBC. In other words, don’t just target the planning desk, target the producers, the reporters, the online team, the regional teams, the TV staff and the radio people.

Douglas chipped in with his own advice – give the planning desks as much notice as possible. In the case of a recent story about the retiral of the chariman at iconic soft drinks company AG Barr, the BBC were infomred an astonishing two months before the event – which meant they probably knew about the development long before the stock market did.

Another fillip for the Scottish PR community is that there will be ever closer integration between BBC Scotland and HQ in London, particularly on business reporting. Big name business programmes, like Working Lunch and Money Box, will be taking on more Scottish content from September, with fuller details to emerge

There was little doubt in the minds of both men – digital is not only the future of the BBC, it is therefore the future of PR. However, one shining hope for the PR fraternity was cruelly swatted down. Robin Glynne Percy, of Profile Plus PR, asked what were the chances of the BBC taking video produced by PR companies. The answer was blunt – virtually none

The event was filmed by Gorkana – and I’m sure that it will be of interest to the ever swelling number of PRs in Scotland and to the every dwindling numbers of journalists on press and broadcast.

Links and more details when I have them.