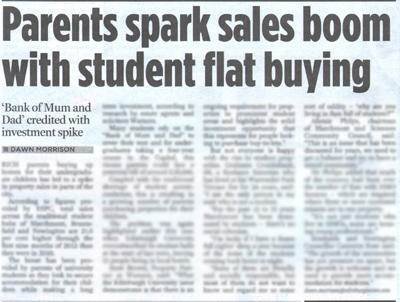 Parents of university students are providing a major boost to Edinburgh’s property market as they look to secure accommodation for their children and make a long term investment, according to research by local estate agents and solicitors Warners.

According to figures provided by ESPC, total sales across the traditional student hubs of Marchmont, Bruntsfield and Newington are 21.6% higher through the first nine months of 2012 than they were in 2010.

Many students rely heavily on the ‘Bank of Mum and Dad’ to help cover their rent payments and for undergraduates taking a four year course in the Capital, this means parents could face a potential bill of around £18,000.

This staggering figure coupled with the traditional shortage of student accommodation in the capital is resulting in a growing number of parents resorting instead to purchasing properties for their children – and highlighting the attraction of buy-to-let investments.

Scott Brown, Property Partner at Warners said: “With Edinburgh’s student population currently at a healthy level which is expected to remain consistently high for the foreseeable future, the availability of accommodation may well worsen and we could see more of the unfortunate situations that have happened in the capital at the start of the academic year.

“What the Edinburgh University issue demonstrates is that there is an ongoing requirement for properties in prominent student areas and highlights the solid investment opportunity that this represents for people looking to purchase buy to lets.”

“Rather than paying rental costs for the duration of their studies, it can actually make sense financially for parents to consider buying a student property for them instead – particularly at the moment with interest rates at a record low.

“It may sound like a radical move, but by purchasing a student flat on a buy-to-let mortgage parents are actually likely see a net long-term gain on the property, as they should be able to sell it for an eventual profit in the future.

“Many will find they are also able to sub-let rooms in the property out to other students during term-time to help cover mortgage repayments.”

This coverage was achieved on behalf of Warners by Holyrood PR and can be viewed here.