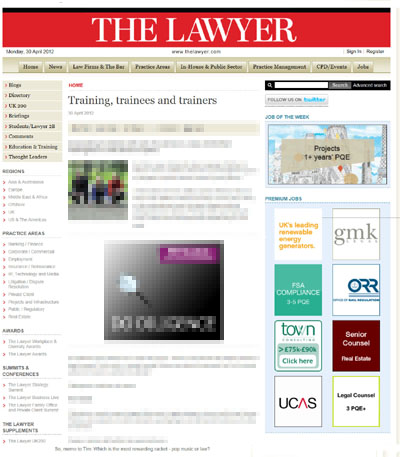 Employees of one of Scotland’s leading law firms, Balfour + Manson, were recently joined by Lynsey Sharp, a young athlete who is competing for a space in the 2012 Olympic Squad.

Lynsey who is not only one of the UK’s top 800m runners, is also studying law at Edinburgh Napier University. She recently took a one off coaching session with Balfour + Manson trainee solicitors.

Balfour + Manson has sponsored Lynsey for the past 10 years. She believes that its support has been crucial to her progression and development in both her athletic and law careers, especially when she was forced to take a year out of training because of an unfortunate injury.

Lynsey commented “For an athlete, being injured is the worst thing that can happen. When I was out for almost a year it was made even worse because I also lost my UK Athletics funding.

Balfour + Manson partner, David Flint, who takes a lead role in mentoring the firm’s trainees, added, “This was a most worthwhile session and there is no doubt our trainees benefitted greatly from meeting Lynsey and gaining an insight to the pressures she experiences in her daily life.

“Lynsey shows so many of the best qualities that any business would want to see in the young people joining its ranks. She is a very impressive and personable.  We are very proud that our company has played a significant part in helping her fly the flag for Scotland in international competition.”

This coverage can be viewed in full on the Lawyer website and was achieved as part of the ongoing PR campaign by the Holyrood PR on behalf of Balfour + Manson.