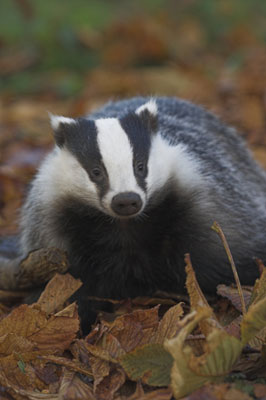 When it came to Scottish Water workers Bill Gracie and Jim Gardiner going above and beyond the call of duty the answer was in front of them – in black and white.

On a routine inspection of the Drongan Waste Water Treatment Works in Ayrshire the duo discovered a badger, which had fallen into a 10 foot deep sludge tank.

The animal was curled up asleep, having spent the night trapped in the wet well. The creature had fallen into the well during his nocturnal wanderings.

The tank is surrounded by barriers for the health and safety of staff, but the badger slipped past these as he continued on his night-time foray through the works.

“We couldn’t believe it when we looked down in to the tank and there was this little ball of black and white fur curled up asleep. Once we’d gotten over the shock the next thing we asked ourselves was how do we get him out?

“After a round of phone calls to different animal welfare charities we eventually got in touch with the SSPCA, who sent a nice girl out to rescue the badger. He was heavier than he looked and Jim and I were asked to lend a hand.”

Bill slipped the grappling hook over the badger’s neck and together he and Jim lifted the creature onto a landing net.

Jim Gardiner added:”You would think he would be grateful to be rescued, but I think he was just a bit grumpy from us disturbing his sleep and probably a little bit bruised from having fallen 10 feet down into the wet well.

“He was hissing, spitting and grunting and his claws were flailing about wildly, but he calmed down when he realised we were trying to help and he eventually wandered off none the worse for wear.”

The rescue was a group effort all round, with Bill and Jim playing their part in releasing the badger back into the wilds of South Ayrshire.

Scottish SPCA Chief Inspector Hamish Mackintosh said: “It is always very rewarding when we are able to rescue and release an animal in distress.

“In this particular case the badger was well and truly stuck and completely dependent on the quick thinking of the Scottish Water workers who discovered him and our ambulance driver who attended the call.

“On examination he was found to be uninjured and was released back in to the wild, none the worse for his ordeal.

“The men did the right thing in contacting us quickly. Our advice to anyone who discovers an injured or distressed animal is to call the Scottish SPCA Animal Helpline on 03000 999 999.”

Do you want your business to benefit from our award winning Public sector PR?

We’d love the chance to meet with you and find out the kind of obstacles and opportunities in your sector.