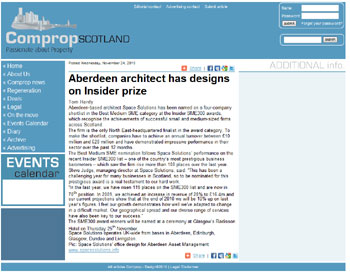 The country’s leading workplace designers have received another high profile PR in Scotland success in the specialist commercial property press.

The influential ComProp Scotland website reported on how Space Solutions had been shortlisted for the Best Medium SME prize at the prestigious Insider SME300 awards.

Space Solutions joined three other firms on the shortlist for the prize, which is open to any company in Scotland achieving annual turnover between £10 million and £20 million. The nomination was the culmination of an impressive 12 months for the firm, which saw it jump more than 100 places on the Insider SME300 list earlier this year.

The coverage can be viewed on the ComProp Scotland website and was the result of a sustained PR in Scotland strategy managed by Edinburgh public relations experts the Holyrood PR.