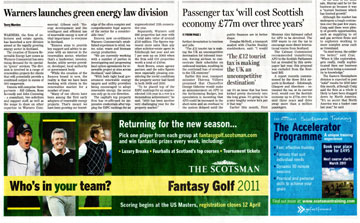 The firm revealed to Scotland on Sunday that it had come top of the Edinburgh Solicitors Property Centre (ESPC) standings in 2010 after selling 600 properties for a total of around £110 million.

The stats are higher than at any other firm in the city and are up on Warners’ sales in 2009. Estate agency partner Scott Brown said that the figures were a sign that the city’s property market was continuing to move in the right direction.

The full article can be read on the Scotland on Sunday website and was the result of a sustained PR in Scotland campaign carried out by the Holyrood PR.