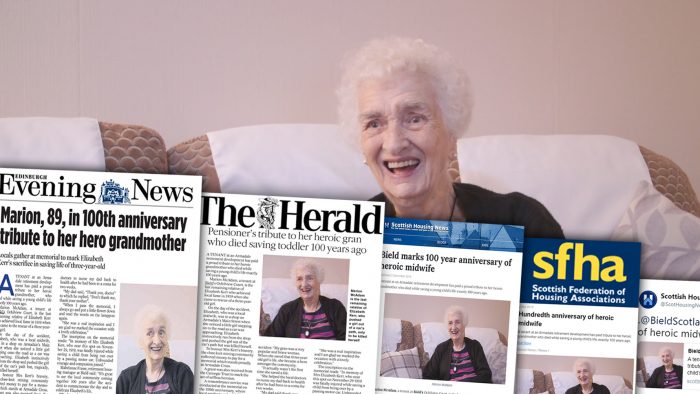 A PROUD woman has paid a proud tribute to her heroic grandmother who died while saving a young child’s life exactly 100 years ago.

Marion McAdam, who is now 89, is a tenant at Bield’s Ochilview Court in Armadale. She is the last surviving relative of Elizabeth Kerr who achieved local fame in 1919 when she rescued a three-year-old girl.

To mark the centenary we worked with proud Marion and the team at care provider Bield to help raise awareness of the century-old story of selfless sacrifice. That tribute story captured the imagination of the media, with results which included:

On the day of the accident in 1919, Elizabeth, who was a local midwife, was in a shop on Armadale’s Main Street when she noticed a little girl stepping onto the road as a car was approaching. Elizabeth instinctively ran from the shop and pushed the girl out of the car’s path but tragically, was killed herself.

To honour Mrs Kerr’s bravery, the close-knit mining community collected money to pay for a memorial which stands proudly at Armadale Cross. A grant was also received from the Carnegie Trust to mark her act of heroism.

A remembrance service was conducted at the memorial on the 100th anniversary, where local residents, school children and council members were present.

Integrating traditional PR services with video boosts results as it communicates with your audience in a different and engaging way. People are increasingly watching video content to consume and it is only going to increase.

PR professionals will have to ensure video services become an integrated and integral part of all future campaigns.

The original press release can be found here

STORIES TOLD IN THE RIGHT WAY TO THE RIGHT AUDIENCES CAN TRANSFORM YOUR PUBLIC PROFILE.

The Charity PR experts at Holyrood PR are always on hand to help your business tell its stories to the world. Get in touch with us today by calling us on 0131 561 2244 or by filling in the contact form below: