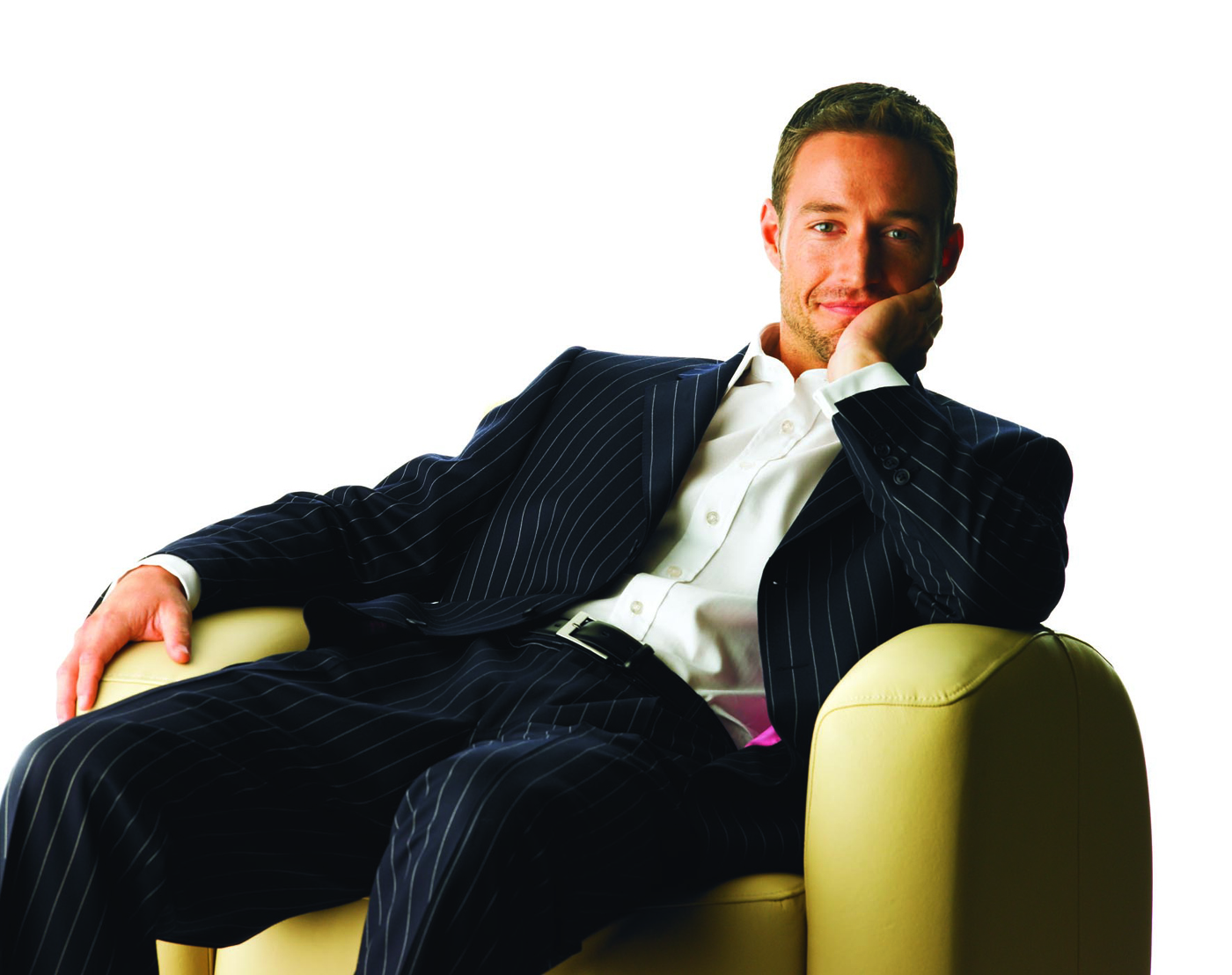 The changes came at a time of profound growth and change for the business, as it also embarked on a period of business transformation after securing major funding, not least to create a hi-tech, £800,000 mechanised picking and packing array.

This brought the Glasgow-based firm a range of serious communications challenges, including:

The first priority was to develop and deliver a high-quality quarterly newletter targeted at the independent clothing outlets, who were known to be generally unimpressed with email communication and dismissive of showy directing mailings.

This was to be supported with a regional rollout to key media across the UK, highlighting the many benefits of a Taylor Rae suit to cost-conscious men looking for both quality and individuality.

Meanwhile, it was also agreed to pick a handful of careful mainstream media stories to support the evolution of ACS Clothing’s business, in particular the runaway success of its central kilt hire service and the Cameron Ross rebranding.

Over a six-month campaign,  the results were stellar:

Here is how we achieved those results with a compelling mix of creative thinking and outstanding storytelling: 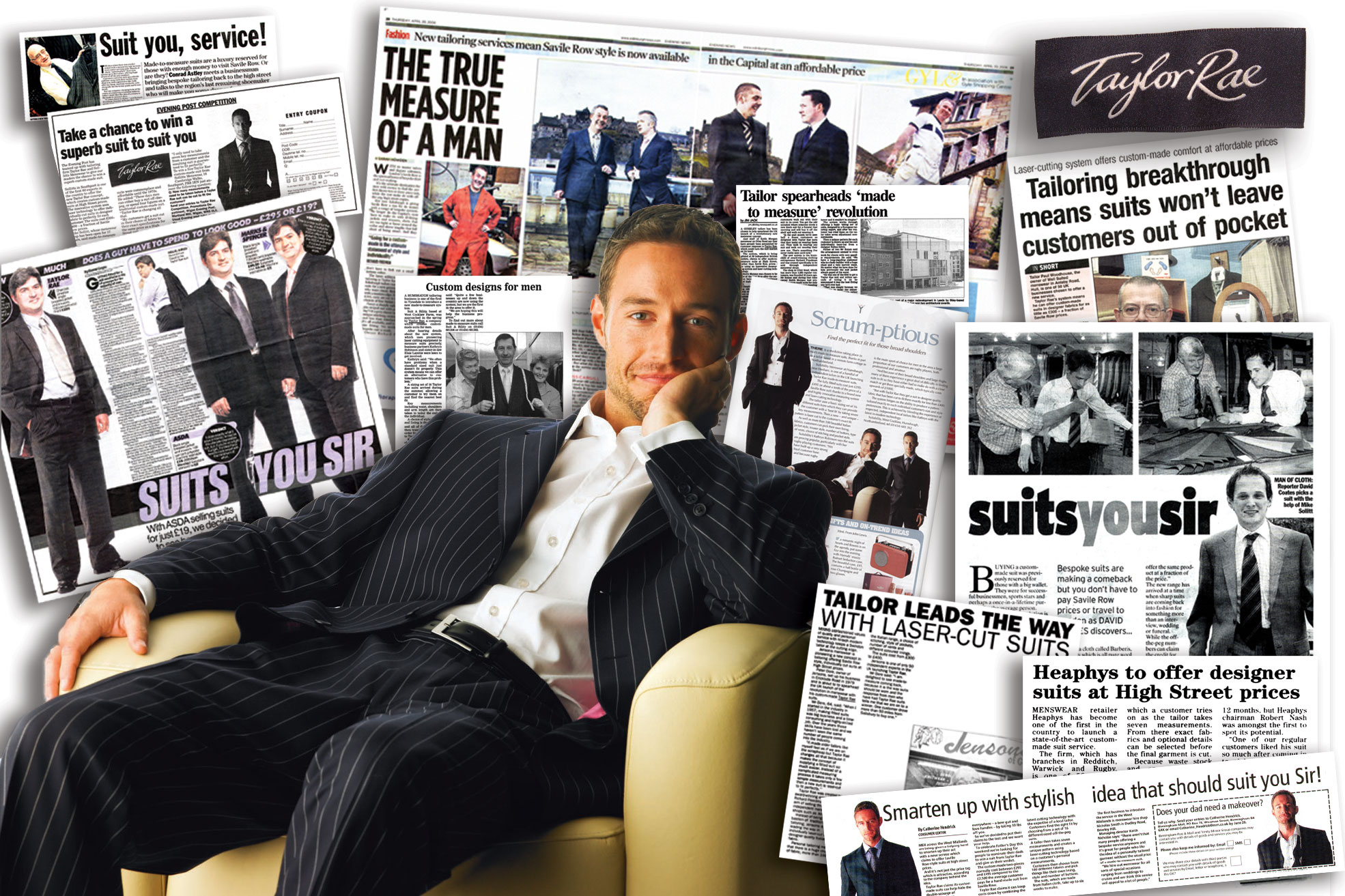 To position Taylor Rae as effectively as possible, it was agreed to target local media titles across the UK focusing on the involvement of the first 30 independent stores spearheading the rollout.

Where those outlets agreed to participate, we interviewed the store principles, identifying local news angles and customising the stories for local media. This also gave us the chance to explain the benefits to locally-based businesses.

Each story explained how the Taylor Rae system used seven simple measurement, 100 high quality Italian fabrics and a range of customisation options to deliver the best possible fitting suits from £295 – a fraction of the price of normal bespoke suits.

This approach yielded more than 25 significant items of coverage across the UK including in major urban areas such as Manchester, Birmingham, Hull, Newcastle, Glasgow, Edinburgh, Aberdeen and South Wales.

Taylor Rae also featured heavily in the Threads newsletter – ensuring independent outlets across the country were receiving up-to-date advice about the range, how it worked and the many benefits of offiering it. 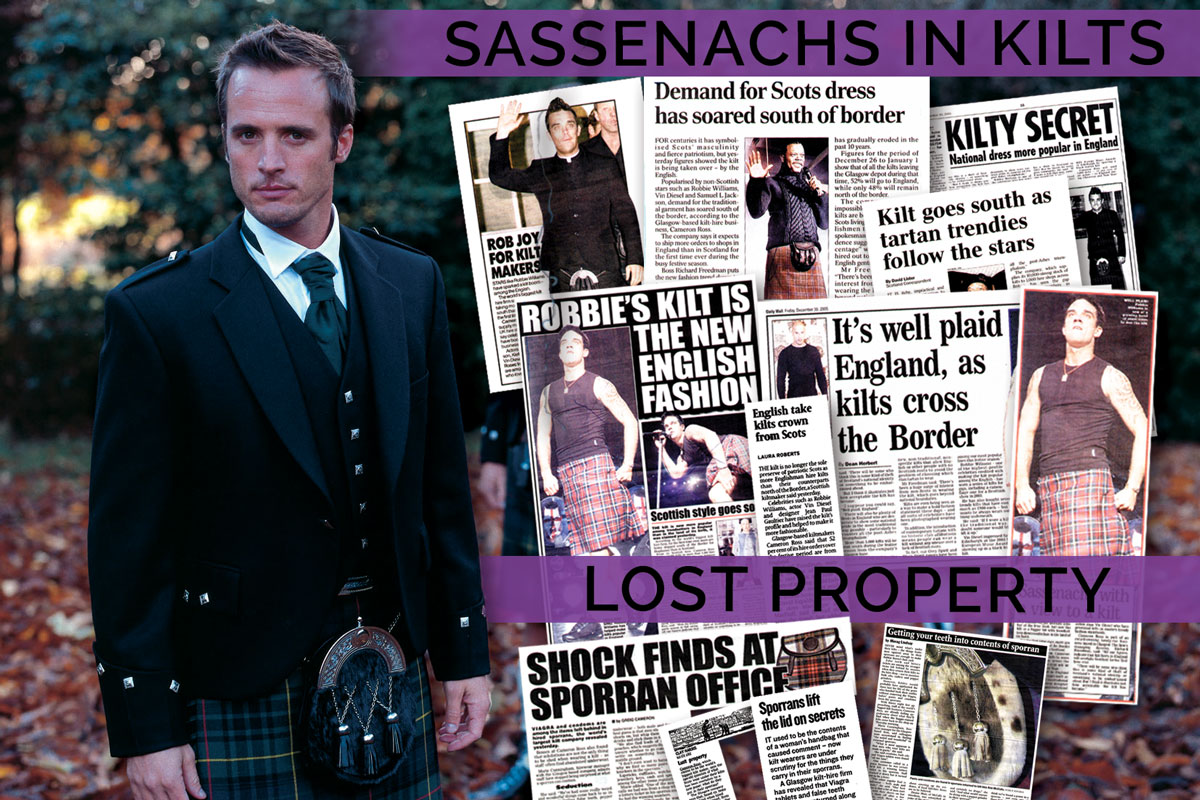 The first was to reveal that Cameron Ross kilt hire sales were greater in England than in Scotland for the first time ever – with 52% of orders coming from south of the border at the busiest time of the year. Additionally, we highlighted how celebrity kilt wearers – including Robbie Williams and Samuel L Jackson had fuelled this “Sassenach love of the kilt”.

That story alone generated at least 30 major items of coverage, including in national news titles such as The Times, The Sun, The Daily Mail and The Daily Express. It was also reported widely on the BBC regional channels across the UK, including BBC Shropshire, BBC Newcastle and BBC North Yorkshire. The story was also picked up by the Press Association, which meant it was also reported in a host of regional titles, including the Liverpool Echo, Birmingham Post and Western Daily Press. The story featured extensively in all main Scottish daily titles, including the Daily Record, Herald, Scotsman and Press & Journal

We followed up that story with another about the most common – and the most unusual -items left in sporrans when they were returned to the company after hires (usually for weddings). Items included Viagra tablets, condoms and even false teeth.

This story also caught the imagination of the media, delivering extensive coverage, including national titles such as The Sun, Daily Star and the Financial Times, as well as major broadcast reach on both XFM and Saga FM.

These stories – a month apart – yielded tens of millions of Opportunities To See and to Hear the Cameron Ross name, at exactly the same time that independent outlets who supplied the ACS Clothing kilt hire range were receiving the first Threads newsletter explaining more about the Cameron Ross rebrand. 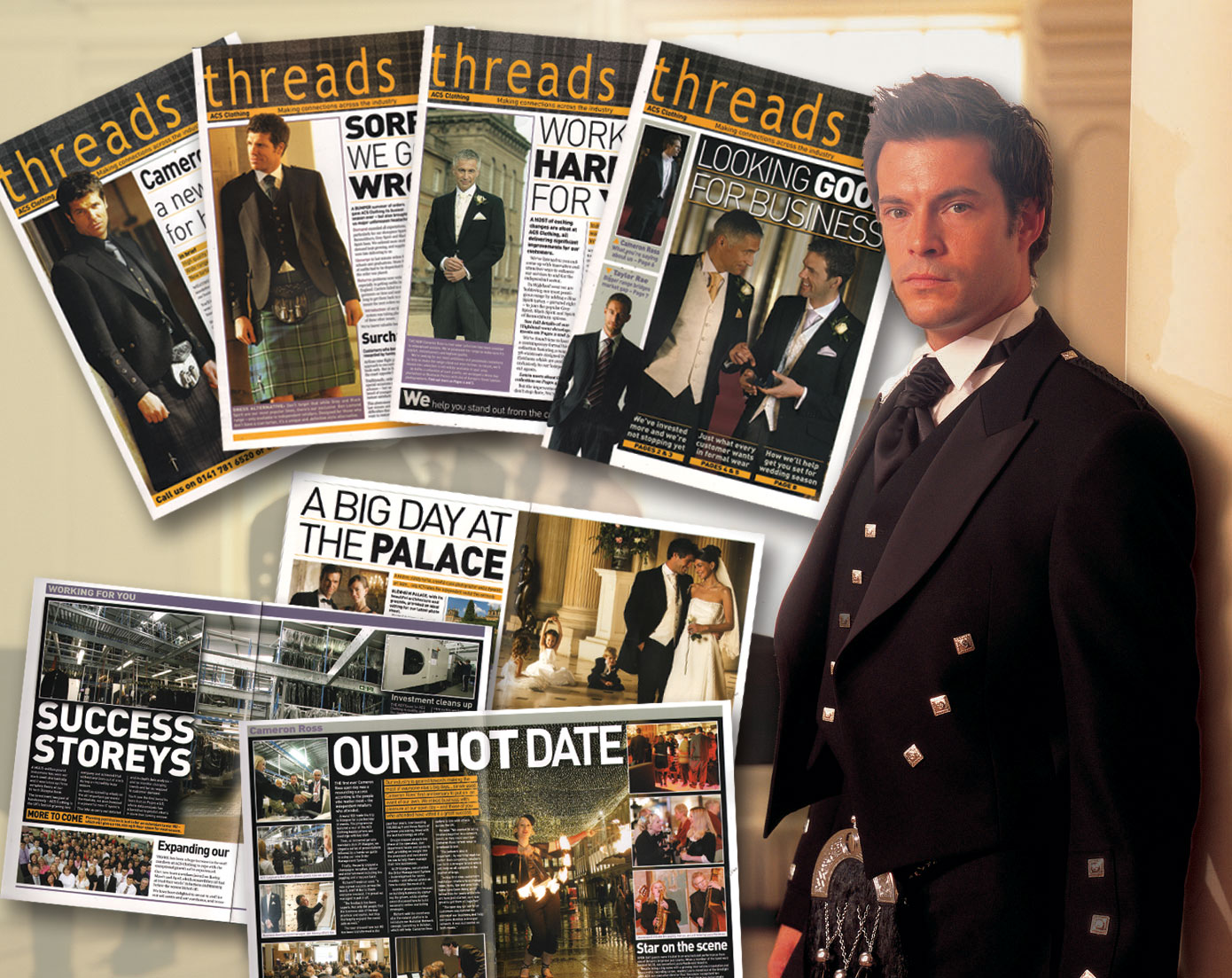 Holyrood PR devised, named and led the design of the newsletter, ensuring it was eyecatching with a classy design and instantly recognisable Grey Spirit tartan masthead from the Cameron Ross range.

We produced all of the content for each edition, as well as overseeing the choice of  images and the produciton and printing process – all to agreed deadlines.

Issues covered included the launch of both Cameron Ross and Taylor Rae; updates on changes in ordering, deliveries, and pricing processes withing ACS Clothing; news updates on the major changes to the company’s warehousing and logistics operation; explanations of new marketing and store display collateral; as well as first news about updates, enhancements and extensions to the ranges on offer.

Doesn’t your business deserves to be our next PR case study? Speak to us now

There are many good reasons that Holyrood PR in Edinburgh has won multiple gold and silver awards – including being named Scotland’s Most Outstanding Small PR agency.

Our range of PR services can help your business to blossom – and we’d love the chance to discuss the possibilities with you. Call us at any time on 0131 561 2244, or fill in the simple form below, and we’ll get straight back to you: