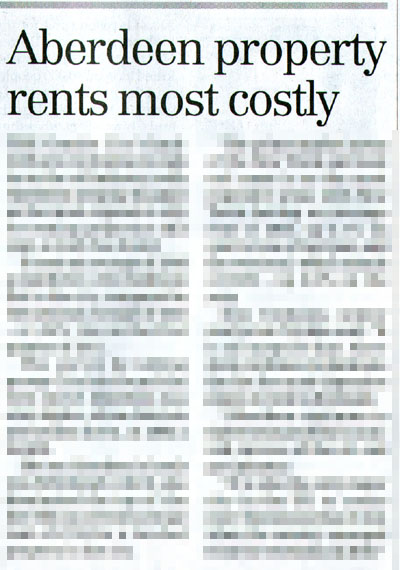 Excellent PR in Scotland for Citylets with National Press

Renting property in Aberdeen is continuing to be the most expensive in Scotland according to the UK’s number one lettings portal Citylets.

The only detailed analysis into the private rented sector by the firm has revealed that the Granite City is continuing to cash in on the oil industry with the average rent for a two bed property in the city standing at £849, compared to a national average of £627.

Aberdeen’s West End was the most expensive area to rent in Scotland with the average rent sitting at £993 a month.

Hot on Aberdeen’s tail was Edinburgh which also dominated the top of the list with the overall average rent for the capital at £712.

Dan Cookson, Senior Analyst at Citylets, said: “It is no surprise that Aberdeen continues to dominate the list for most expensive places to rent in Scotland.

“Aberdeen continues to thrive because of the continued success of the oil and gas industry.

“It is also the only major city in the UK to create more businesses than it lost when the country emerged from the recession in 2010.”

The prime market areas of the New Town and West End in Edinburgh also made the top of the list with the New Town having an average rent of £940 whilst the West End stands at £939, up 0.6% on the year.

This coverage was secured with The Herald as part of a sustained PR campaign carried out by Holyrood PR on behalf of Citylets.