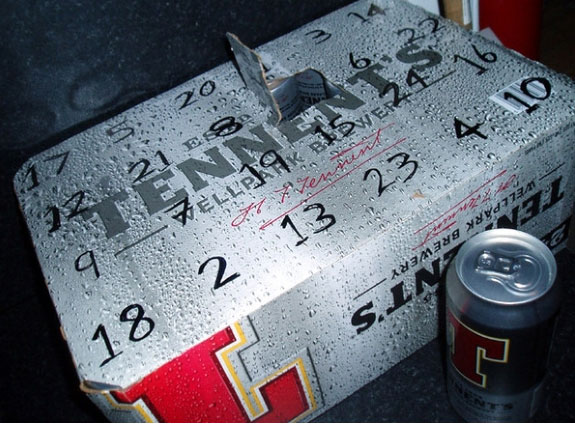 Our American friends have celebrated Thanksgiving this week, which means that the Christmas season is now approaching with unbridled haste. Therefore, to get into the festive spirit, here’s an oldie from online resource Kontraband that should lead to some Christmas chuckles. Yes, it’s the Scottish advent calendar – and much better, in my opinion, than those rubbishy ones that dispense the tiny bits of chocolate.
http://www.kontraband.com/pics/20791/Scottish-Advent-Calendar/

THE STORE WHO STOLE CHRISTMAS (Laura)

Last week we brought you news of how the John Lewis Christmas advert was taking YouTube by storm and this week another Christmas advert is making waves on social media platforms, but not necessarily in the same way. Viewers have expressed their fury over Littlewoods advert by taking to Facebook to launch a petition to have it taken off the air. Parents in support of the campaign believe that the advert, which credits Mum for all the wonderful gifts on Christmas day, ruins the magic of Christmas. Over 300 people have signed the petition to remove the advert, but the Advertising Standards Agency have said that the advert breaches no advertising rules. Personally I think the reaction to the advert is a little extreme, as surely this is what all Christmas adverts do? Even the John Lewis advert which has been revered by viewers is about how the best thing about Christmas is giving the perfect gift not about Santa!
http://www.dailymail.co.uk/news/article-2066039/Littlewoods-Facebook-users-complain-TV-Christmas-advert.html

If you haven’t already seen this advert from Nando’s featuring deceased dictators Saddam Hussein and Colonel Gaddafi take a minute to feast your eyes on this nugget!  The fast food chain known for their hot flavoured chicken have released this controversial advert showing scenes of a budding bromance between the dictators. Bound to shock and raise some eyebrows this ad alludes to a more playful side they may have possessed.  Hussein looks longingly down the table at the empty seats-who do you think his ideal dinner guests would be!?!
http://www.youtube.com/watch?v=w6_qlRWw4Ec

Following on from Laura’s post yesterday about the student who needed to be cut free by fire-fighters after becoming entwined in a clothes horse, it got me thinking about truly ridiculous call outs that the emergency services must receive.

And so cue a link from the Huffington Post revealing some of the more unusual phone calls that the London Fire Brigade have received in the past 12 months.

One rather clumsy gentleman somehow managed to get a ring stuck on his, ahem, nether regions which required the dispatch of two fire engines containing ten fire fighters to remove it.

I embarrassingly got myself stuck in one of those red and yellow Little Tykes kids cars a couple of years ago, but luckily I didn’t have to make any embarrassing calls, it just took a bit of wriggling and determination for a good half an hour.
http://www.huffingtonpost.co.uk/2011/11/24/penis-rings-stupid-999-calls-revealed_n_1112137.html?ref=uk

OUR CARS ARE OUR PALS (Gaynor)

So I remember when I bought my car I spent probably over half an hour thinking about what ‘she’ would be called. I considered her as my pal and a new member of my family that’s why I had to give her a name. Her maroon colour and quirky features (she is a VW polo) led to me calling her Roxy. Don’t ask why she just looked like a Roxy to me. Every girl I know that has a car has named their transport companion and I’m sure we will all be relieved to know that we are not alone. This article in the Daily Mail talks about the different names given to cars and that infact 3 % of cars have been named after work colleagues! A study that has been carried out has also revealed that drivers of BMWs, Volkswagens and Land Rovers are the most likely to name their cars. That makes me feel a bit better.
http://www.dailymail.co.uk/news/article-2065935/From-Prince-William-Lady-Gaga-nicknames-cars–why.html