A Taste Of The Orient For Wine Company With SOS Coverage 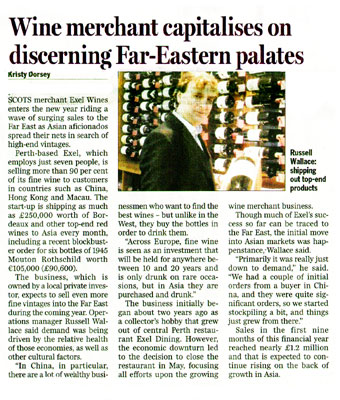 Exel Wines has uncorked some full bodied PR Scotland with fantastic coverage in Scotland on Sunday.

The article, was featured in the business section of the Scotland based publication and focuses on the wine retailer’s recent surge in Far Eastern customers as Asian aficianados spread their nets in serach of high end vintages.

The Perth based business, offers a selection of fine and rare wines, as well as whiskies and spirits, selling to both retail and trade. More than 90% of its sales are to customers in countries such as Hong Kong, China and Macau and are shipping as much as £250,000 worth of wines to Asia every month.

Operations Manager at Exel Wines Russell Wallace suggests in the article that most of the demand for fine wine, is being driven by the economical wealth of Far Eastern countries.

He quotes: “In China, in particular there are a lot of wealthy business men who want to find the best wines – but unlike in the West they buy the bottles in order to drink them.

“Across Europe, fine wine is seen as an investment that will be held anywhere between 10 and 20 years and is only drink on rare occassions, but in Asia they are purchased and drunk.”

From what initially started as a collectors hobby based at central Perth restuarant Exel Dining, Exel Wines grew into a successful business after the restaurant closed due to th economic downturn and the team were able to focus their efforts on the grwoing wine merchants business.

In its first 9 months, sales at the start up company have reached £1.2million and are expected to continue throughout 2011.

The full article can be viewed on the Scotsman’s website and was secured as part of a sustained PR and social media campaign carried oout by the Holyrood PR.