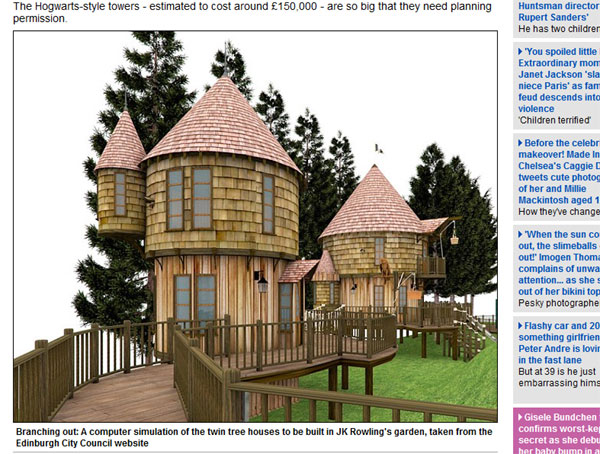 Got plenty to share? Aye well so do we so check get in touch with Facebook or Twitter…or both!

THEIR VERY OWN HOGWARTS (Gaynor)

So J.K Rowling’s children will be the envy of children all over the world after it was revealed that she was looking to build a real life Hogwarts in the back garden of her Edinburgh mansion. The Hogwarts style towers will cost £150,000 and are intended for the author’s two youngest children David, nine and his sister McKenzie, seven. Plans which have been published on the City of Edinburgh Council’s website show the spectacular tree house with its bridges and tunnels. Well Jel.
http://www.dailymail.co.uk/news/article-2178484/JK-Rowling-plans-40ft-high-adventure-treehouse-children-garden-Edinburgh-mansion.htm

Coming across some mental looking creations gives me great joy in my heart but it mostly ignites jealousy rage! Why didn’t I make that!? Josh Marlar’s creation is no different with his Evil Dead inspired boombox! It looks like Frankenstein’s pet dug but is  something that should be up in my gaff!
http://www.obviouswinner.com/obvwin/2012/7/25/the-necronomicon-ex-mortis-boombox-will-swallow-your-soul.html

So, London 2012, THE OLYMPICS, is really nearly upon us! It feels like the hype psyching us up for this moment has been going on for years – all leading up to this Friday and the following 2 weeks of world class competition. For those Olympic fans who are into their social media, this years Olympics are set to be the biggest yet.  Since the last Olympics in 2008, Facebook has gone from having 100 million users to 900 million and every day 400 Million tweets go out – there were only ever 300,000 a day four years ago! And it is twitter that will, this year, provide athletes and spectators alike, the opportunity to share their experience, and joy or disappointment, with the rest of their world. But the big question is, with over 10,000 competing athletes, who will you be following this summer?!
http://mashable.com/2012/07/24/olympic-athletes-twitter/

FLY FROM MANCHESTER TO ROME FOR FREE AND NO HASSLE! (Alix)

There have been several high-level investigations announced after 11 year old Liam Corcoran flew to Rome on his own from Manchester Airport without a passport, ticket or boarding pass. He evaded five security checks and successfully boarded the flight to the Italian capital. The little boy had ran away from his mother during a shopping trip only 3 miles away from the airport but was later returned back to Manchester unharmed. His mother had reported him missing to the Greater Manchester Police, but it seems that Liam was thousands of miles up in the sky making his way to Roma. He remained on board after landing at Rome Fiumicino Airport and returned to Manchester on the same plane. I really need a holiday and think Rome would do nicely… I might head up to Manchester Airport and see what I can arrange…
http://www.telegraph.co.uk/travel/travelnews/9425737/Manchester-Airport-11-year-old-schoolboys-stowaway-flight-to-Rome-prompts-Government-investigation.html

So, seeing as the sun is out, for the first time in what feels like years, I thought I’d do a slightly topical blog post about….sunburn. As a fair skinned, light haired person, I never welcome those warm rays without slight trepidation. It has been known for my skin’s reaction to sunlight to vary between a deep red scalyness and water-filled blisters. Lovely, eh?! So, as I am currently in the office and therefore unlikely to provide anyone with amusing sunburn mishaps, and due to the fact I’m seethingly jealous of everyone not inside, I thought I’d share the little known site – http://www.nosunblock.com – with you all. Enjoy, and just remember; suncream is not only a safety precaution but an aesthetic essential, for you and everyone you cross paths with. Check out the link below for looks that really are TOO hot to trot.