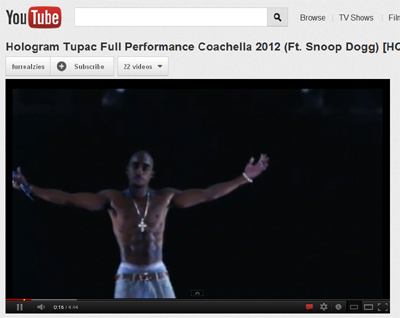 Rate today’s links? Want to let the team know? You can Tweet us or write on our Facebook wall!

At last weekend’s Coachella music festival in California, the impossible happened – Tupac Shakur rose from the dead and wowed the crowds. No, not really, but some clever technology allowed a projection of the slain rapper to perform his hit, Hail Mary alongside Snoop Dogg.
It is incredibly lifelike, and apparently was achieved through a combination of optical illusion and 2d projection techniques.
The stunt is said to have baffled Coachella’s crowd, with one Twitter user commenting, “I can’t even begin to imagine what this Tupac hologram is doing to all the people at Coachella that have been on acid for 3 days straight.”
Rumour has it that there will now be a Tupac hologram tour. Amazing.

An awful lot of people still don’t see a place for social media in busines (sigh). So I particularly love this mash up which combines the trendly social platform du jour, with the glamour of outrageous high heels – and the mundanity of car insurance.
Top work by Confused.com to spote the female-friendly blend of heels and Pinterest and to cleverly tie it back to their core business – comparing car insurance quotes. With a prize no more expensive than a pair of flat shoes, they’ve persuaded thousands of women to pin photos of their wobbliest footwear. Result

If you are the ultimate clubber then this may be music to your ears. Heineken’s year long exploration project ‘create the club of the future initiative’ has finally finished after being shown at the Milan design fair. The project which was entirely crowd sourced, saw 100 clubbers from more than 20 cities across the world contribute their ideas to create a pioneering concept club through a creative online hub. I’m not sure about the look of the club itself but I do like some of the ideas.  The interactive bar which was designed to help bar staff know whose next in the queue is quite cool. The origami shaped wall also sounds a nice idea- it was designed to let clubbers express their thoughts after dancing the night away. I can see slurs and expletives featuring heavily.

WHAT A GREAT IKEA (Lewis)

An afternoon in IKEA is usually littered with fighting couples but one unique pair decided to buck that trend by hosting their nuptuials there. So surrounded by their friends, family and flat-packed Swedish furniture, Julie ‘Bunny’ Rodgers and Willie ‘Bear’ Pittman exchanged vows and then chowed down on meatballs.
Celebrating the fact that their first date two years ago was in Maryland’s College Park IKEA, the happy pair decided that it was the perfect venue for their marriage. This has to be one of the strangest places to get married but if it’s what the bride wants, who are we to argue.

How do you react when your own daughter tells you she doesn’t like you and that her and all her friends make fun of you because you are fat. Surely you would sit them down and talk to them to find out what it is they don’t like about you or you can simply allow the phase to pass…we have all once in our lifetime said we hate our parents. I suppose the worst way to react would be to take to YouTube and have a personal rant towards the camera. In this video the dad, username ‘BuffetJacksontv’, goes on a huge rant, and calls her daughter all sorts of names. There is doubts about whether or not this video is genuine as he is a man who likes to post rant videos but either way it still makes me laugh, especially the bit about Santa.
Would you talk to your daughter like this?