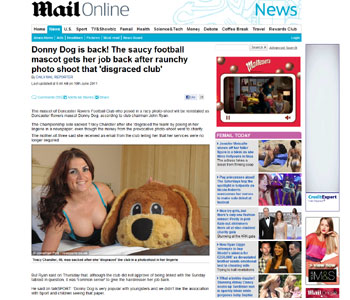 In perhaps one of the strangest news items of the week, Doncaster Rovers mascot Donny the Dog has been granted a last minute reprieve by club bosses following a lingerie photoshoot that they claimed had “embarrassed” the club.

The popular mascot had been the centre of a so-called scandal after the woman who dons the costume at Doncaster home games – mum of three Tracy Chandler – posed in lingerie in a Sunday newspaper. As she also posed next to the head from the Donny Dog costume in the pictures, stuffy officials decided she’d brought the club into disrepute and sacked her.

No matter that the money raised from the photos was going to be donated to charity – or that the club was accused of hypocrisy for actually allowing its own players to participate in a nude calendar for the same charity earlier in the season. Obviously when such pictures involve a woman in her pants, the codgers in charge view it as a huge disgrace.

Thankfully, after the story was rightly highlighted in every daily tabloid and branded as stupidity by the majority of the country, the club has now admitted to making a mistake and Tracy has her job back. So good news all round.

NOW THAT’S WHAT YOU CALL A NORTH-SOUTH DIVIDE (Scott)

With the SNP’s rise to power at Holyrood, a separatist agenda is at the forefront in Scottish politics. But for all the talk of a north-south divide in the UK, the issues besetting us pale against those affecting Italy. We’re more used to hearing about Silvio Berlusconi’s bedroom antics and media monopolies or the comings and goings of football starts in Serie A. However, Italy – just 150 years old – has some deep-rooted problem many will find surprising.

Staff at a Domino’s takeaway have had to apologise after an 11-year-old boy called to collect his pizza – only to find his receipt order had been made out in the name of ‘Ginger Kid’.

The parents of red-haired Ross Wajtknecht were outraged, Ross himself was upset – and Domino’s very contrite.

But what’s very interesting is the rush of comments – 175 at time of writing – with a mix of typical, good-natured ginge ribbing and support from fellow red heads, balanced with opinion that the parents of Ross should not be making an issue and to ensure their boy gets over it.

10-year-old Tom Phillips did an astonishing thing two weeks ago when he saved his father’s life. The young boy had a quick reaction to what he saw before him on the farm in Abergavenny, South Wales – his father being trampled by a huge 2,000lb bull which threw him up in the air like a rag doll, breaking 10 of his ribs and causing him serious internal bleeding.

The brave youngster saw an opportunity to save his father’s life and rightly took it, by climbing onto a tractor on the farm and driving it slowly towards where his father lay underneath the bull. He successfully managed to nudge the animal away from his dad then ran back to the farmhouse to alert his mother Amanda.

Amanda said: ‘I’ve told him that he did the right thing and that without using the tractor to push the bull away his dad would not have survived. He said that as he was driving the tractor at the bull he was so worried about crushing his father’s legs under the wheels.’ Fortunately, Tom’s father Andrew is alive and well –  and his mum didn’t even tell him off for using the tractor.

What a brave young kid. I can’t say I’d have had the guts to do something so courageous like that when I was his age.

Stephen Fry has come over all PC whilst penning the modern remake of war time movie classic the Dam Busters, renaming the faithful black Labrador as digger rather than n****r as he is historically called. The move comes after Fry announced that the name which can also be used as a racial insult might be offensive to American viewers. Yet it seems that you can’t keep everyone happy as the decision has lead to criticism from historians and aviation fans claiming that Fry is attempting to re-write history and that the name in its original form provides a reflection of generational changes.

In my opinion, I think the name change was a right decision, as once the film is released it will prevent the point and history of the film from being lost in the centre of a race row – which is a very real possibility from today’s complaining consumers.