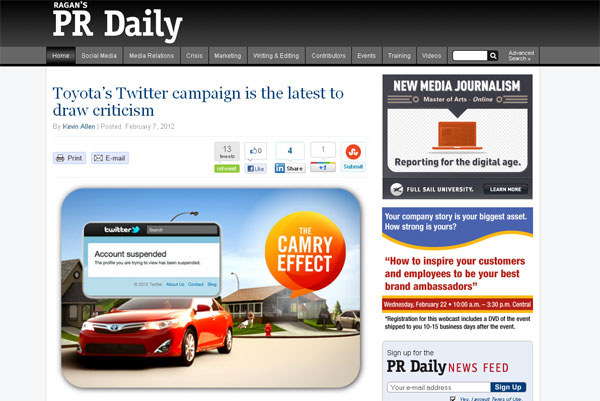 WATCH OUT THERE’S A BLOG THEIF ABOUT (Laura)

I came across this interesting article in today’s The DRUM about two agencies who have found themselves caught up in a plagiarism row concerning the authorship of their blog posts. Edinburgh based agency Attacat found that at least two of its blog posts had appeared verbatim on Manchester agency Cube3’s blog post and immediately posted a fresh blog post taking a tongue in cheek poke at the so called thieves – ‘there’s a blog post thief about; bring out your memes’ In all fairness to Cube3 they issued an apology straight away and declared the blog posts copyright of Attacat. It turns out that the rogue blogger was an intern no longer at the company – but the story doesn’t end there! After The DRUM did a little bit of digging it turns out that the rogue blogger has also been copying blog posts from other agencies for his own personal blog – the cheek! This very real story brings home the importance of creating genuine and original content for your website or blog, as not only are you deceiving your followers, you are also putting the authenticity of your business in jeopardy as Cube 3 found out in this case. So when it comes to blogging remember the three golden rules – keep it real, keep it interesting and above all keep it original!
http://www.thedrum.co.uk/news/2012/02/07/agency-plagiarism-curious-case-attacat-cube3-and-alleged-rogue-blogger?utm_source=Interspire&utm_medium=email&utm_campaign=The+Drum+Newsletter+Update+-+7th+Feb+2012

Companies are well aware of the importance and potential success of launching new products via clever social media campaigns. However, if not implemented carefully they face heavy criticism which sometimes cannot be easily reversed. Next to land in the list of social media failures is the Toyota Twitter campaign for the launch of its Camry Effect to promote the 2012 model. Along with McDonalds, Research in Motion and Quantas, Toyota came up with a well intentioned hash-tag only to watch it obliterate their campaign. Super Bowl-related hashtags #CamryEffect were sent @ reply messages suggesting they sign up for a contest to win a Camry. To deepen the wound, the tweets were sent from a series of accounts that had been verified by Twitter provoking additional backlash against Twitter for appearing to endorse the spam campaign.Toyota apologised for their so-called ambitious campaign but they’re blunder will no doubt be overshadowed by another doomed Twitter train wreck-I’ll give it a month if that.
http://www.prdaily.com/Main/Articles/10768.aspx

The Man Who Lived on His Bike (Scott)

Even though we’re all used to YouTube and spoiled by the multiple TV channels we have, there is no disputing that video is an incredibly exciting medium. With some basic kit, a wee bit of clever thinking, a pinch of invention, a few willing people happy to appear before the camera it’s possible to create some genuinely useful, interesting or eyecatching content. Not sure what this guy was promoting (other than his love of cycling), but increasingly businesses are waking up to how creative video and other content can help them stand out.Getting back to bike man, though, I hope that once he found the girl of his dreams, all that time in the saddle didn’t affect him in any unfortunate ways!
http://vimeo.com/35927275

A basic whiteboard scribbling spread like wildfire over the weekend with the photo attracting more than 60,000 ‘likes’ on Facebook alone.  It was snapped with Instagram and then posted on the company’s Twitter and Facebook accounts and it aims to explain the various popular social media platforms in simple terms, using the analogy of donuts.  The viral sensation was the ingenius result of two employees of US firm Three Ships Media, who were bored on a Friday afternoon and decided to design something to cover up some empty some wall space.  It took just five minutes to complete apparently.  This is a great example of how the best ideas are often the easiest and how you can never plan the popularity of online content.  Bravo.
http://instagr.am/p/nm695/

The inventiveness and devotion of some artists never ceases to amaze me – especially when their creations are things of wonder and beauty. This falls slap bang into the ‘jaw-dropping’ category for me. The work which must be involved creating these incredibly intricate artworks from an incredibly complex series of paper cuts is awesome. Feast your eyes.
http://funbindass.com/amazing-pictures-made-out-of-a-single-sheet-of-paper/