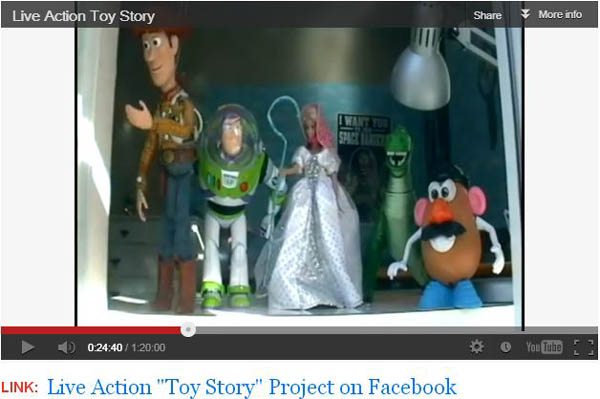 To keep up to date with the teams antics check out our Facebook, Twitter, Google+ and LinkedIn pages.

WHEN TOY STORY WAS REAL…(Gaynor)

Being a major of fan of the Toy Story trilogy I was excited to find out that two people have recreated the Pixar version of Toy Story original and made it in real life. The film which took two years to create is a copy cat version of the original and is just brilliant. Using string to puppeteer the toys, it is edited well enough to make you feel like you are watching the original. Just brilliant!
http://www.buzzfeed.com/julianbrand/the-entire-toy-story-movie-done-in-real-life-6eof

Prankster Liam Keane was filmed taking a dip in none other than Ireland’s biggest pothole. The joker took to his brightly coloured swim wear and hopped into the five foot deep opening in Lismire, Co. Cork. The power that is social media meant that of course the video went viral and has so far racked up an astonishing 400,000 hits. Given the rate that people are emigrating from the Emerald Isle I’m guessing that figure is probably more than current population. Fair play to Liam, who advised he was just doing it for the ‘craic’, as within 24 hours Cork County Council had gotten wind of the video and filled up the hole.
http://www.youtube.com/watch?v=86yJ-yfim2o

Anyone out there who works in a cubicle should appreciate this quirky piece from our favourite, mashable.com. The site has created a list of the 10 most amusing cubicle makeovers, and while I don’t recommend you set to straight away, customising your colleagues’ work bubbles, this will provide some gentle inspiration and much hilarity. A word of warning, do not leave your cubicle unattended of any lengthy period of time.
http://mashable.com/2013/01/13/joke-cubicle-makeovers/

NO PANTS ON THE SUBWAY (Victoria)

Just imagine on your daily commute if you were greeted by a bunch of half naked people who were going about their business as if nothing was up! Well that’s what happened yesterday morning in various world cities including Sydney, London, New York and Beijing. New York city based prank collective Improv Everywhere established the annual, No Pants Subway Ride in 2001 which has quickly spread across the globe in the years it has been running. Don’t think I would be whipping my trousers off in this chilly weather, what brave folks!
http://improveverywhere.com/missions/the-no-pants-subway-ride/

A new series of videos have emerged on the web of this man called Greg who walks around places giving his f*cking tour. His last hit was of a cruise ship he was on and his latest video is during his spell in Las Vegas. At first I didn’t like these videos but once you start watching a few you find yourself smirking at them, and the simplicity of these videos makes it even better. All that is used is your everyday handheld camera, nothing fancy and very basic editing. He films around 5-7 seconds at different spots, puts it together, pops it onto YouTube and the hits build up.
This is a classic example of putting up regular content to your channel and sharing it. These videos are nothing special, but they are unique and this is why I believe they work. I wonder where he will f*cking end up next.
http://youtu.be/OdjtcHnshPg