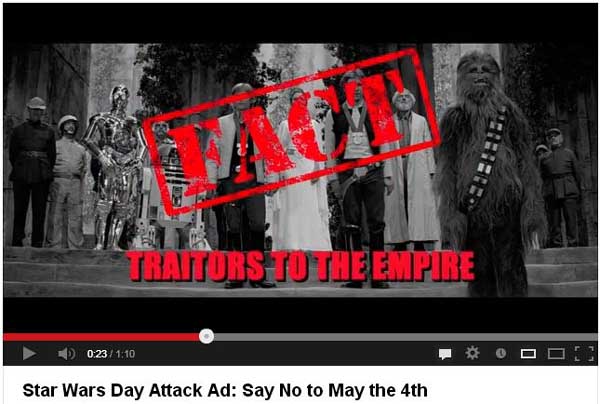 Got any web delights of your own you fancy sharing? Check us out on Facebook, Twitter, LinkedIn and Google +

MAY THE 4th BE WITH YOU (Aoibhínn)

The weekend saw one of the most pin-tastic day’s of the year. Our news feeds and trends on twitter were filled with well wishes from Star Wars fans. Over the weekend the Galactic Empire (thats Star Wars for all us non-fanatics) – released a video on YouTube denouncing the day, claiming that “the Jedi and rebels are traitors to the Empire, and so are all those that celebrate May the 4th. A fantasticly clever bit of PR that proves Star Wars really knows its audience, the tongue-in-cheek video seems to come directly from the evil leaders of the Empire, in classic 1984 indoctrination-style.
http://www.youtube.com/watch?feature=player_embedded&v=m3ROQJ-Vvy4

Calling all superhero geeks – your dreams are about to become a reality! A group of students at the Royal College of Art in London have created two masks that give the wearer superhuman sight and hearing. The first prototype covers the wearer’s ears, mouth and nose and can allow them to target a person in the crowd whom they can then hear clearly thanks to a directional microphone. The second prototype is wonr over the eyes and special technology allows the wearer to see movement patters among other things. So, where can I get me one of each?
http://mashable.com/2013/05/06/mask-superhuman/

A FELINE CUP OF TEA (Roser)

Although I have already seen bars like this one in Asia, this new has really surprised me. While some bars do not allow pets, Ms Pears will create a bar in which cats will be the main attraction since they will be living there! Yes, that is not a joke. This new bar is set to open the first of July in London and it has already received plenty of support through the social media. The owner says it could be a bit surreal, but after the major support she has received, raising up to £100,000 for the opening, Ms Pears is determined to open the Lady Dinahs Cat Emporium, name of the future establishment. So, here it is a new excuse to visit London this summer!
http://metro.co.uk/2013/05/05/cat-cafe-in-london-moves-a-step-closer-as-thousands-wait-to-be-first-through-the-door-3713273/

TIME TO SHUT DOWN MY FB PROFILE? (Lisa)

That is the question raised in this blog and it seems the answer is a resounding YES. Although it looks like having an increasing popularity, some research has shown that in the last two months Facebook has lost over nine million users in the US and more than two million users in the UK. Unimaginable when at one point it seemed to be taking over. However, I am sure it will still be the most popular form of social media for some months to come, since lots of us spend countless hours looking for hot gossip about our well known peers.
http://www.huffingtonpost.co.uk/planet-ivy/facebook-doomed-to-fail_b_3209128.html

It is widely known that who is rolling in it (the cash we mean) sometimes have unbelievable ideas to quench their thirst to spend. But this example goes to the way beyond that. This article collects 5 theme parks which were just too insane to build. I for one wish they would have been constructed -they look amazing. With tremendous creativity and imagination, the rich dreamers forgot some important logistical aspects. They got stuck when trying to turn a truck full of venture capital into a time machine or to build the park in the middle of the sea with giant glass bubbles. Definitely worth taking a look at these theme parks that never transpired!
http://www.cracked.com/article_20410_5-insane-theme-parks-you-wont-believe-were-almost-built.html