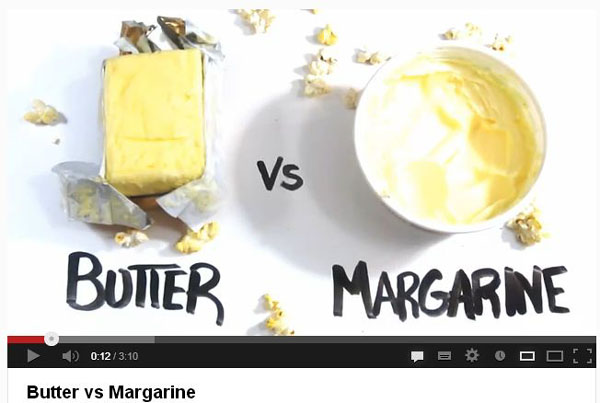 For more from the Holyrood PR team why not have a peek at our Facebook, Twitter, Google+ and Linkedin.

Have you ever pondered the question, “which is better, butter or margarine” whilst doing your weekly shop? Do you even know the difference? This short but informative video helps you understand the difference, but also show you which one is actually better for you. Will this change your opinion when you next decided which spread to put on your bread? It will for me.
http://youtu.be/KG_ybdk1VaE

It’s Monday morning and what better way to kickstart your week, that a brain teaser about celebs? Why don’t you cast your blurry, heavy eyes over these images of waxworks on display at the Museo de Cera in Tijuana, Mexico and see what celebs are hanging about.
Branded as “life-life”, I will leave it to you to guess who the models are carved in resemblance of and hopefully it will get your brain going for the week head.
http://www.thesun.co.uk/sol/homepage/news/4821944/Madame-Tusfrauds.html

When I saw the announcement in this morning’s Huffington Post, that a child born with the virus that causes Aids appears to have been cured, I became quite emotional. This could be put down to a weekend of slight overindulgence and inevitable Monday-morning blues, however I like to think it’s more than that. This is the world’s second only reported cure, and scientists believe the findings could be used to treat the many cases of babies born with the virus in the developing world. Although there is no guarantee that the child will remain healthy, scientists are cautiously confident as only traces of the virus’s genetic material were found still lingering. For something that really puts Blue Monday into perspective, click the link for more.
http://www.huffingtonpost.co.uk/2013/03/04/aids-baby-cured-mississipi-child-_n_2804400.html?utm_hp_ref=uk&utm_hp_ref=uk

Just when we thought the Japanese couldn’t shock us any more, their unusual and sometimes unsettling subcultures have amazed and impressed us mere Westerners for decades. One of the most unusual and hilarious sport’s to emerge from Japan is no different, enter Binocular Football. A frantic game where players don the most ridiculous striped suits resembling baby grows, pop on a pair of binoculars and attempt to play a game of regular football. The results are hysterical, just take a peek for your self and giggle away the Monday blues.
http://www.youtube.com/watch?v=ChK_kp-P9I0

Sinkholes, along with the formation of earthquake cracks, are phenomena which fascinates but scares the utter crap out of me.Where do you end up? Fast route to hell? It was brought to the surface again after another beast opened in Florida swallowing up a man who lived there. Unlucky way to go, unless there’s something beneath the surface we don’t know about and those who have been sucked under are the chosen ones. The Huffington Post offers some answers to the cause of sinkholes but despite there being some warning signs to look out for, it seems these can still emerge from nowhere.
Check out the gallery which sends a shiver right down the old spinal chord.
http://www.huffingtonpost.com/2013/03/03/what-causes-sinkholes-florida-tragedy-science-subsidence_n_2799848.html