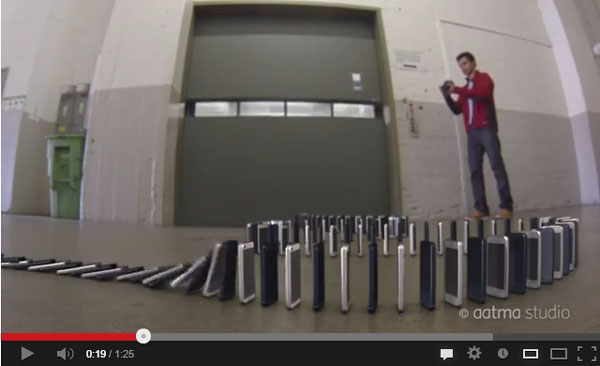 We’ve always got our eyes stuck to our screens for a mere megabyte of web wonders but hit us up on Facebook, Twitter, Linkedin or Google + with yours.

It really does baffle me how some video’s, no matter how mundane or silly they appear to be, still achieve a phenomenal amount of views. A video showing what seems to be thousands upon thousands of iPhones falling like dominoes has went viral since it’s upload on the 17th April. With more than 3million views in less than a week, the video which has come from Aatma Animation Studios features over 10,000 iPhone 5’s. The reality is that the San Francisco based company used just one phone and let computer graphics fabricate the rest. Cleverly done, but really not sure I get it, thoughts please?!

I loved maths at school. Fractions, times tables and trigonometry were a total passion – the compass and that X12,000 TVY calculator or whatever its model number were my trusted allies. Couldn’t be further from the truth, maths sucked the liquid out my eye balls. So when I read that one mathematician said miracles should happen to everyone about once a month, like with working out the angle degrees of another meaningless box, I thought what a load of mincemeat, I’ve never made that. Unless you consider witnessing another bin set ablaze, finding a pigeon setting up pregnancy shop outside your window or stumbling across someone’s used kegs on your way to work an event of miraculous nature – in hindsight those might sound quite exciting. Maybe I need to be more perceptive and count getting out my sleep bench on time fives times a week a blinder.

If you’ve ever wondered why police stations seem so busy when we try to report our bicycle stolen this might be the answer – two officers in a police station in Devon reported their tin of biscuits missing and the incident was recorded as a crime and the result is an interesting hypothesis. I can, however, understand their anxiety, a tin of biscuits is essential in order to keep working.

Have you ever become red faced when abruptly forgetting someone’s name? No worries, now you’ve got an excuse. A group of neuroscientists have come up with an explanation which proves that having wee lapses just after being told a person’s name is an effective strategy which our brain uses to gain long-term memory. So, don’t panic, if you don’t remember a name just after being told it’s a good sign, you’ll never forget it again!

Internet users have been quick off the mark already and started the latest online craze of photoshopping footballer Luis Suarez to become a variety of biting characters. From cannibal Hannibal Lecter to star of teen-movie Twilight, online users have been extremely creative as you can see by the compilation made here by The Sun. The Liverpool footballer bit Chelsea star Branislav Ivanovic during a match and has now become a comedy viral setting the most creative online users into a frenzy over the latest drama. Have a look and see if you could add to the montage of chomping images.