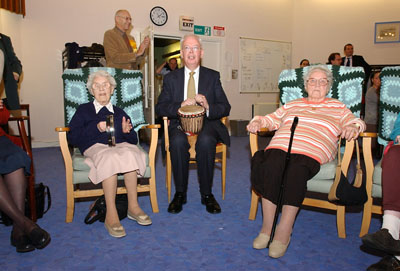 A  lasting legacy which was bestowed upon Bield’s St Mungo Park Care home in Selkirk was featured in this week’s Border’s Telegraph.

Bessie Ingles, a previous resident of the care home left a piano when she died in 1999 ensuring residents will enjoy music for years to come.

She also left money to be spent on garden improvements which have now been completed. This success story has prompted Bield to launch a campaign to encourage residents to leave their own legacy donations behind.

Kevin Rowe, fundraiser at Bield said “Bessie’s generosity to Bield after she passed away was overwhelming to both the staff and residents at Mungo Park Court who will now have a finely tuned piano for life.

“That and her donations to help improve the garden and the lounge area is a real indication that  she recognised the great work of Bield and therefore wanted to leave a gift behind to say thank you to that service.

“Our residents have benefitted a great deal from these kind legacies.  From previous donations we have been able to build such things as new gardens, conservatories and summer houses which have gone a long way in ensuring both our residents and staff are getting the most out of their experience with Bield.

“We hope that people think about us in their will and help us to continue running great services across the country.”

Bield – a registered charity – has grown from humble beginnings, starting out with one housing development in Bo’ness to become a major provider of a wide range of housing and services for around 20,000 older people across 22 local authority areas.

This coverage was secured in the Borders Telegraph as part of a targeted PR campaign carried out by public relation experts Holyrood PR on behalf of Bield.