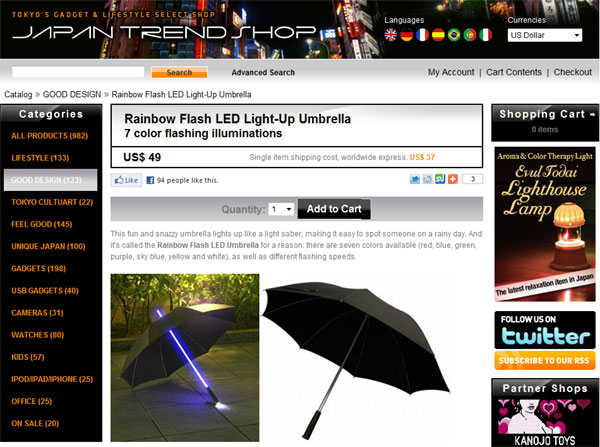 MAY THE FORCE BE WITH YOU (AIMEE)

So the summer months have been a bit of a wash out and I’m just beginning to feel a little less bitter about it.  I’m beginning to think that In Scotland umbrellas should be a bit of a statement piece seeing as we’re never short of getting a thrashing and I think I’ve found mine for the months ahead.

I’m not a Star Wars fan (or Star Trek which I think is especially bad) but this Rainbow Flash LED umbrella is pretty cool and will be great for dark winter nights.  Already a best seller in Japan, it is extremely easy to use and is powered by simple household batteries with the light being switch operated.

It’s available in seven colours and has different flashing speeds.

Get choosing yours now at the link below:

To see it in flashing action check it out here: http://www.youtube.com/watch?v=Y8QzEstLNo4

ONE MAN AND HIS LLAMA (Adrian)

Considering the number of dog trials and training events there are around the world, you’d imagine that our four-legged friends are reigning supreme as the most obedient members of the animal kingdom. But following some unusual trials in Southampton, a new pretender to the throne has emerged – llamas.

A group of llamas and alpacas were given the same kind of obedience trials that dogs are subjected to, and wowed trainers when they successfully completed tasks such as fetching and rolling over on command. They even managed to complete a mini assault course and are apparently “completing more and more tasks every day”.

Move over pooches. I’m expecting a specialist llama section at Crufts within the next five years at least.

Despite it’s rather off-putting smell and the fact that all the colours mash together and end up a muddy brown, I’ve always been fascinated by plasticine.

So I spent at least … ooooh, two minutes … gawping at these models of famous people and despots, lovingly hand-crafted by a plasticine artists.

Pay attention Primary three teachers up and down the country – a new benchmark has now been set for your young charges.

He’s at it again. Never one to miss an opportunity to get his mug on camera, Russian president Vladimir Putin has stripped for the occasion yet again in what looks to be a fake medical examination.  I don’t know who’s doing this guys PR, but it must be hilarious.  This man will do anything to get the attention of the media.

Have a look at his Russian moobs.

As most cinephiles will tell you, it’s rarely the summer months that bring the best movies to our screens. While the kids are off school, we get all the explosions and multi-million dollar spectacles that the “event film” can offer – but, more often than not, the results are fairly underwhelming. After all, blockbusters rarely get rewarded by the critics or the Oscars.

Therefore, the autumn months tend to be the time where cinema becomes more interesting and cerebral, as studios start to gear up their prestige pictures in plenty of time for the awards season. Here, geek site io9 previews some of their top picks for Autumn movies that are likely be awesome – as well as some that could be the surprise sleeper hits of the year.