A Generous Portion of the News 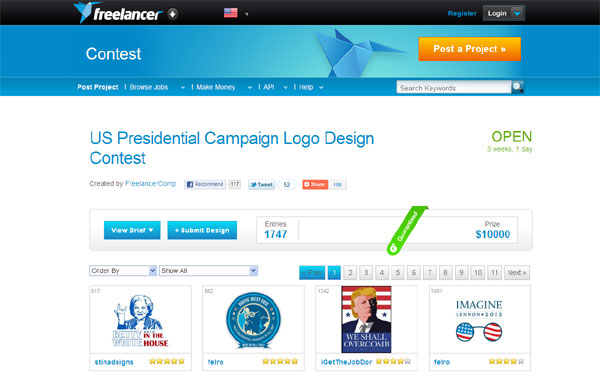 The highlight of our day is seeing this blog post going up with all our lovely suggestions and we want to share this experience with everyone who reads it. If you have a link you’d like to suggest to us then use our twitter or facebook pages and give us the goods.

Website Freelancer.com has run a crowd-sourcing competition for users to come up with US Presidential Campaign logos. With tongues firmly in cheeks, an army of creative souls have let rip, with amusing results. High point for me is the Warhol-esque image of Donald Trump in imperious, chin-up pose – with the legend: “We Shall Overcomb”. Check out the rest – from Winnie the Pooh to Mr T- at the Freelancer.com site.

Google is cool – we all know that – and this blog post lists six things which make it even cooler than you thought. The American who created this calls Google “neat” and from French insights to finding the perfect product, it proves Google really is a tidy little engine.

AN ENGLISHMAN’S HOME IS HIS CASTLE? – PERHAPS NOT (Raymond)

The dream of owning your own home has been a cornerstone of social aspiration for generations in Britain. But with the property crash and the well documented difficulty in securing mortgages, it seems young people are happy to give up on that idyll – and instead are happy to rent for life. A new study by the National Centre for Social Research says Britain will become a nation of renters within a generation. That scenario offers all sorts of issues – what will banks do with if mortgage volumes stop; are there enough rented properties; what’s the future for estate agents. A sign of the times, indeed…

WHO WOULD YOU RATHER SLEEP WITH – CAMERON OR SALMOND? (Laura)

Members of parliament aren’t exactly well known for their sex appeal, but one website is putting the mmmmm back into MP by encouraging people to vote for the sexiest male and female MPs. The results from the poll carried out by sexymp.co.uk reveal that Luciana Berger (Lab) from Liverpool is the sexiest female and Zac Goldsmith (Con) from Richmond Park is the sexiest male. What is interesting to note is that of the top ten male and female lists, 50% are conservative MPs which shows how times are changing and the image of the straight laced conservative MP is becoming a thing of the past. Bad luck for Prime Minister David Cameron who made it to a paltry 131 and SNP’s Alex Salmond was nowhere to be seen….I wonder why.

A baby hedgehog saved by an animal charity has found herself a bit on the lonely side all because she was born without spines.  The mystery skin problem has left the bald creature too scared to mix with her peers because she has no means of defending herself.  Due to the nature of her condition, the tiny animal needs around the clock care meaning it will be unlikely she’ll ever be released back into the wild.  Is this what happens to men too???

New show apartment launched at top of the class development