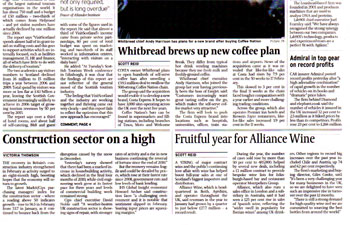 Scotland’s leading wine importer and distribution company has celebrated a stunning year of sales in 2010.

Alliance Wine revealed in The Scotsman that the number of cases it had sold had risen more than 50 per cent over the past year to 485,000 – helped by several new deals, including a £1 million contract to provide bespoke wine lists for Edinburgh-based bar and restaurant operator Montpeliers Group.

The firm, which also runs a sales office in London and a subsidiary in Australia, said it had seen a 125 per cent rise in sales of Spanish wine, reflecting the “wider swell in popularity for Iberian wines” among UK drinkers. Other regions to record big increases over the past year included Chile and Austria, which were up 74 and 62 per cent respectively.

The full story, which was secured thanks to the expertise of Holyrood PR PR in Scotland, can be viewed on the Scotsman website.