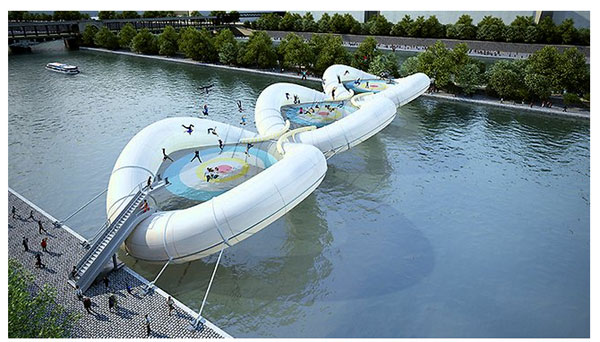 We’re always on the hunt for news of the bizarre, funny, controversial, inspiring and straight down geniusness-so get sending on Facebook or Twitter!

THAT BRIDGE IS BOUNCIN’ (Aimee)

Being lied to about the railway line across the Forth Road Bridge has never quite left me! But feelings of resentment have subsided after reading about plans for an inflatable bridge in Paris! Visitors to the French city could soon be bouncing across River Seine  on a giant inflatable trampoline bridge! Imagine getting views of the Eiffel Tower on this beast!
http://www.news.com.au/travel/news/a-giant-inflatable-trampoline-bridge-in-paris/story-e6frfq80-1226498454551

A man who shares the same name as tour operator Thomas Cook has received a free holiday after posting a cheeky comment on its Facebook page – but not from Thomas Cook themselves.
He requested a free holiday to compensate him for the lifetime of ridicule he claims he has been subjected to for sharing the same name as the firm and received a polite reply rejecting this.
This is where holiday rival lowcostholidays.com stepped in and kindly offered to send the young man to Paris.
A bit of a PR fail on Thomas Cook’s behalf – this would have been an ideal opportunity to score a positive bit of press – and a triumph for lowcostholidays.com – bravo.
It certainly pays to complain!
http://imgur.com/a/Lyo8S#BDrx5

I needed no further reason to have the utmost disdain and dislike for BNP leader Nick Griffin, however, after last night’s Twitter revelations I am sure a far larger section of Britain’s population that will have his face adorning their drat boards. The blatantly homophobic, racist, evil little man MR Griffin last night took to Twitter, revealing the home address of two homosexual men who won a court battle against a Christian B&B owner who refused to let them share a room, on the grounds their relationship went against her beliefs. The victory achieved on behalf of homosexual rights was quickly undermined when Griffin used the social media site to advocate protests outside the couple’s home. The sooner this man is brought to justice, the better.
http://www.huffingtonpost.co.uk/2012/10/19/nick-griffin-twitter-_n_1984053.html?ref=topbar

HOW TO NOT BREAK THE ICE (Lewis)

A new video has emerged online with a “brave” man looking to jump into a pool that has frozen up. With it only being uploaded last month, the video has already racked up over 3 million views on YouTube. The eagerly anticipated fool is already standing about freezing in his trunks before trying to hype himself up to the camera before jumping in. Our prolific protagonist jumps in but only to slide on the rock solid ice and land right on his tail bone…OUCH! As always, his friends who are there laugh hysterically whilst their friend lies there on the ice, rolling in pain. He better put some ice on that!
http://www.youtube.com/watch?v=zd7c5tQCs1I

Some attempts at creativty scream desperation and at times can ignite more yawns rather than the desired squeals of shock!
This article from the Daily Mash titled ‘Creative people likely to suffer from pretentiousness’ sums it up perfectly with satirical observations suggesting that artistic endeavours are less avante-garde and more full of sh*t.
http://www.thedailymash.co.uk/news/arts-entertainment/creative-people-likely-to-suffer-from-pretentiousness-2012101945801