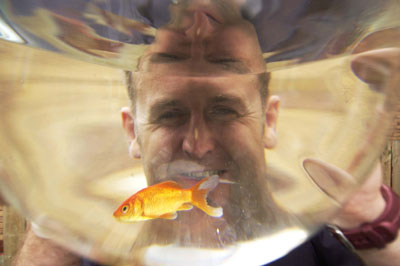 Congratulations to the PR team at Scottish Water on the widespread media coverage achieved with their story about a goldfish being rescued from the sewers.

The lucky fish suffered the indignity of being flushed down someone’s toilet, but because of heavy rain managed to survive in the sewers – until it was spotted and rescued by a sharp-eyed worked at a sewage treatment plant.

Amazingly, once it was popped in a bowl of clean water, the wee fella perked up fine. Indeed, the fish is showing no adverse effects from its sewer trip, apart from the fact it’s now been saddled with the nickname, Poo.

Not only was this a PR Scotland success story, it racked up public relations brownie points by achieving coverage across the UK and across the world – and Scottish Water press officer Chris Hodge takes the credit for the story.

Most of the media were quick to draw parallels between the fortunate fish and the popular Disney movie Finding Nemo. All of which worked a treat and had Chris sitting back watching the hits rack up from the unexpected Scottish public relations coup.

Since Holyrood PR has been providing PR expertise to Scottish Water since 2002 we know the media team well and I was quick to drop an email commending the Hodge-meister on his success..

It’s fair to say that as well as being exhilarated by the scale of the coverage, he was also a little bit perplexed – not least by the well-read coverage given to the story by the online version of Practical Fishkeeping magazine.

As the bemused Scottish Water press officer pointed out: “That’s quite ironic – surely flushing your goldfish down the loo is not practical fishkeeping!”

Then again, the magazine made its own stance on the issue quite clear, by carrying a photo of a goldfish with the caption: “Flushing goldfish is a crappy thing to do.”

Sticking on a fishy them, it’s seems apt to share my own pet’s near-sewer-experience.

In July 2005 Deadline Press & Picture Agency was reporting a story about a goldfish which was saved from a blazing house by Lothian and Borders firefighther Brian Todd.

He saved the critter’s life by carefully reviving it in a sink full of fresh water after it was left close to death in its fire-blackened and soot-filled tank after a house fire in Edinburgh’s Liberton area.

The Deadline team had the firefighter happy to pose for photographs, but couldn’t get access to his scaly friend.

Cue a quick trip to Dofo’s petshop in Edinburgh to buy a stand-in goldfish,  complete with glass bowl.

After the photo shoot, snapper Rich Scott was a bit perplexed about what to do with the body double goldfish – shown with rescuer Brian Todd in the photograph on this page.

A trip through the sewers was only narrowly averted when I stepped in and volunteers to take the fish home to Casa Douglas – where it remains to this day. A chubby and well-loved wee testament to my softer side. Awwww.