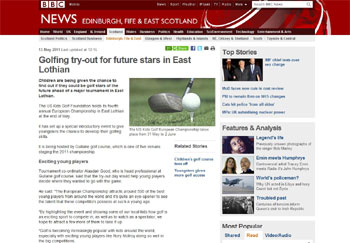 The U.S. Kids Golf European Championship has won more prominent coverage in Scotland’s local media thanks to the expertise of PR and social media experts the Holyrood PR.

The flagship junior golf tournament was highlighted in a range of local newspapers and media sites across Scotland’s central belt, after arranging a special try out day for local youngsters in East Lothian.

The try-out day was devised to encourage young pupils from Gullane Primary School to experience golf first-hand and to improve their fledgling golf skills in a series of tutorials that covered the core disciplines of putting, chipping and driving. It was also intended to raise the profile of the forthcoming European Championship – which will see 500 of the world’s best young players competing on a series of historic links courses in East Lothian.

The event was featured in titles including the East Lothian News, BBC Edinburgh and East, the Edinburgh Evening News, the Ayrshire Post and the Guide & Gazette.