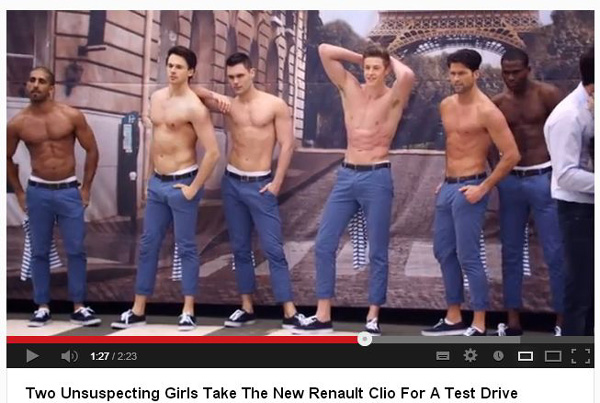 If our blog picks give you some va-va voom then check out our Facebook, Twitter, Linkedin and Google+ for more from the Holyrood team.

Unsuspecting test drivers got a little more than they bargained for when they took the new Renault Clio out for a spin. The leading French car manufacturer has enrolled video technology company Unruly London based production company Scorch London for the targeted online-only campaign which sees surprised drivers watch a Parisian love scene unfold before their eyes when they press the car’s Va-Va Voom button. Complete with live music, street market stalls and my personal favourite; half naked ripped men flexing their guns all over the shop, what’s not to love about this campaign?
http://www.youtube.com/watch?feature=player_embedded&v=LgQSXQHILPM

SHAVE SOME ART ONTO YOU (Melissa)

Some men can be quite paranoid about body hair, and the excessive growth of it, but why settle for plain old shaving or waxing?(Unless you prefer the au natural appeal, each to their own.) Why don’t you shape it! The Sun have made a list of the top 16 funniest examples of male body hair including one guy who shaved a bra of hair into his chest. These hilarious photos should brighten up your Monday like no other, so have a glance and draw inspiration for that perfect beach body hair look you’ve always wanted.
http://www.thesun.co.uk/sol/homepage/features/4864760/the-16-funniest-examples-of-male-body-hair-art.html

The Scots have a bit of a rep for whining about some nonsense and are normally pretty good at contradicting themselves- just listen in on the riveting weather based conversations we can’t seem to escape. Personally I think we add a bit of panache to a whinge sesh but that could be bias. Anyhoo, the latest on our radar is that we’d be chirpier if clocks went forward at the beginning of March – I mean at the end of March, for goodness sake. This is the claim of tourism bosses under the simple premise that more light equals more happiness. They’re probably right but officials have no plans to change the current schedule because it protects our bairns travelling to school. So folks, miserable pussed coupons here to stay as we trunch along in the darkness.
http://www.deadlinenews.co.uk/2013/03/31/scots-would-be-happier-if-the-clocks-were-changed-at-the-start-of-march/

Canned meat manufacturers SPAM have seemingly extended its brand range with the release of its special chocolate Easter egg, which includes bite sized chocolate-coated pieces of meat. One for the choco-carnivores across the world, the unusual pairing of chocolate and meat is not a new concept. Top class restaurants have been serving the odd delicacy for many a year but did you know it was actually the Aztecs who first came up with the concept many centuries ago.
http://www.thedrum.com/news/2013/04/01/spam-releases-easter-egg-including-chocolate-coated-pieces-meat

I PITY THE FOOL (Aimee)

It’s past 12pm so any trickery pranksters out there will be considered the fool. Wait another few hours until tomorrow and once again you will be able to reign as a master of the jokes and here’s a collection of some April Fool’s classics from spaghetti growing trees to exploding trees.
http://news.discovery.com/human/10-classic-april-fools-pranks-130331.htm

As an addition, the slightly more curious beings amongst us may have wondered where this day of official mockery has come from. In brief I can tell you that it originates from a change in the calendar, moving New Year from April to January. Without the tech magic we have nowadays some people were left in the dark to the changes and oh how they were ripped if caught celebrating the ‘old’ New Year. Damn fools. I’d have been one of those fools for sure.
http://news.discovery.com/history/origins-of-april-fools-day-20130401.htm