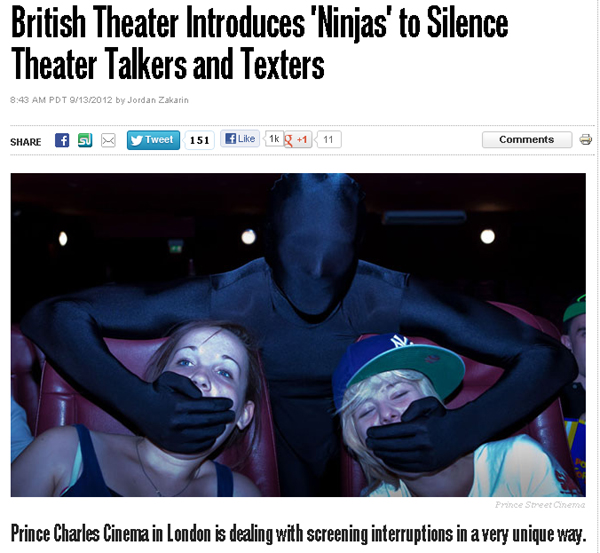 While texting moviegoers have long been a scorn to serious cinephiles, scorn and nasty looks have largely proven ineffective in warding off the unwelcome telecommunication. It so frustrated people at one theater in London, in fact, that they decided to take a real stand against the annoyance.
The Prince Charles Cinema has recruited a “ninja taskforce” to wear skintight, jet black “Morphsuits” and wait in the back of the theater, monitoring the crowd; if anyone whips out the phone and start pounding out texts, the spandex-clad cine-ninjas spring out and accost the cellular offender.
http://www.hollywoodreporter.com/news/prince-charles-cinema-introduces-ninjas-silence-370090

As my flatmates will tell you, if there is a plate to be dropped or a glass to be smashed it’ll be me who does it. So when I purchased my new iPhone last weekend I was easily coerced by the salesperson into buying insurance to cover me for accidental damage etc. etc. etc. However, if new technology for ‘self-healing’ iPhone cases from Nissan is anything to go by I may not need to purchase insurance for such damage in the future. Nissan are in the process of developing iPhone screens that when dropped instigate a chemical reaction that sees any scratches or cracks on the screen disappear. Fantastic news for individuals like myself, who have a severe case of clumsiness!
http://uber-facts.com/2012/03/11/a-magical-iphone-case-will-soon-exist/

NO SUPERSIZING IN NYC (Gaynor)

After trying so hard over the weekend to watch what I am eating (remember the Holyrood girls are on a health kick) I found myself watching Man Vs Food, something which wasn’t probably the best idea. For anyone who enjoys watching Adam devour some of the tastiest and largest dishes in the US, viewers and New Yorkers may be upset to hear that supersized drinks are to be banned in the city. Mayor Michael Bloomberg has had his proposal for the sale of sugary drinks larger than 16oz to be banned in restaurants, cinemas, stadiums and arenas passed by the NYC health board. It’s the first city in the US to outlaw the sale of oversized fizzy drinks. I’ve got a feeling this could cause some controversy.
http://www.metro.co.uk/weird/911957-new-york-city-ban-jumbo-sized-fizzy-drinks-in-bid-to-tackle-obesity

If you’ve found yourself sleep starved due to your upstairs neighbours having an impromptu rave in the middle of the night, then you will appreciate the reaction of a guy from London whose hilarious reaction to his noisy neighbours has gone viral.
33 year old advertising executive Oli Beale was growing increasingly infuriated and sleep starved at his neighbours singing karaoke in the early hours of yesterday morning, so decided he would critique their performance Simon Cowell style and post this on the communal notice board of his apartment building.
My favourite part has to be “I’ve always said it: if you’re going to be woken up after 2 hours sleep, it might as well be to a herd of morons screaming ‘Tiny Dancer’.​
https://twitter.com/olibeale/status/244749864234274819/photo/1

With its dark and dingy interior Glasgow’s subway isn’t always the most inviting of places. However, as part of a station modernisation program passengers passing through Hillhead station in Glasgow’s West End can now enjoy the artwork of Alasdair Gray. The artist has created a 2 x 12m mural that certainly brightens up the station and showcases the beauty that Glasgow has to offer.
http://www.bbc.co.uk/news/uk-scotland-scotland-business-19612581​