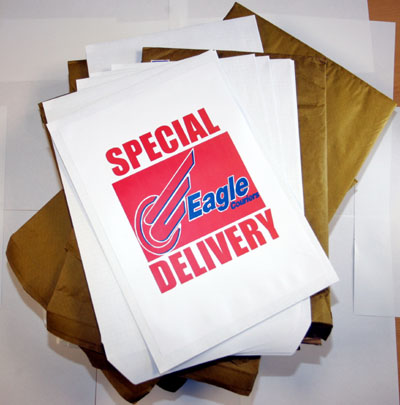 As Sir Chris Hoy and other triumphant Scottish Olympians paraded up and down Glasgow’s city centre, a cycle courier was working behind the scenes to make sure the nation caught a glimpse of it all on TV.

Eagle Couriers cycle courier gave the six time gold medal winner a run for his money, when he had to cycle against the clock to deliver the all important film reel, containing shots of the parade to STV Studios – in time for the 6 o’clock news.

With the parade – which featured many of Scotland’s Olympic and Paralympic medal winners – causing disruption to the city’s traffic, a bike was the only option for the studio to ensure the film tape arrived at its final destination on time.

Jerry Stewart, Director at Eagle Couriers, was delighted that the firm, which has used cycle couriers for 24 years as an effective and efficient delivery method, was selected to carry out the Olympic task.

He said: “We pride ourselves on the service we offer and go to whatever lengths it takes to ensure that our deliveries arrive on time – and often this means ditching the car and getting on a bike instead.

“Bikes are a great method for getting around busy cities quickly, particularly on occasions like this when there is likely to be major disruptions to road traffic and unbelievably we are one of the only couriers left in Scotland which offer this service.

“We were able to deliver the package bang on time and I’m sure our cyclist had to pedal just as fast as Chris Hoy did in his races to ensure he beat the clock.

“Everyone in the office was following the Olympics very closely so we were delighted when we heard the news that we would have an important part to play in the celebratory coverage.”

This is not the first time Eagle Couriers has been entrusted with special cargo, earlier this year it delivered the Calcutta Cup and more recently, the Walker Cup, to London.

Established in 1985 Eagle Couriers has almost 30 years experience in the safe and quick logistics services to organisations across the private, public and third sectors, as well as working directly with consumers.

Tech lessons blossom for pensioners thanks to floral app