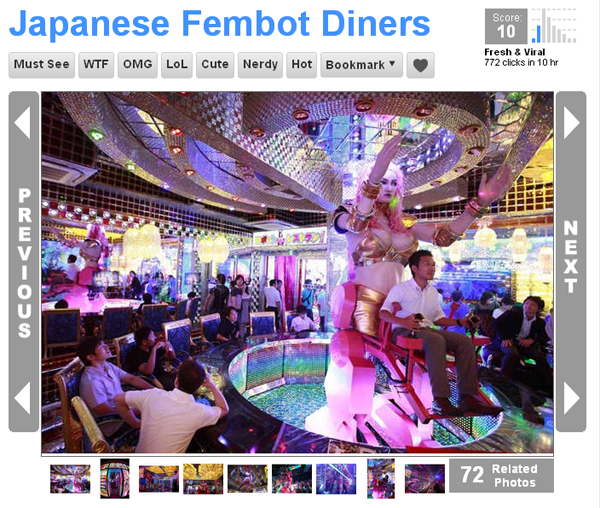 Have you tried a deep fried Mars bar? Fancy a ‘fembot feast’? Let us know via Facebook or Twitter!

In Japan it seems the simple act of eating out as a well deserved treat isn’t interesting enough! But when you think of all the other weird and wonderful things to come out of Japan, a robot restaurant shouldn’t be a jaw dropper!
Opening up in Tokyo’s famous red light district, the restaurant treats diners to the spectacle of massive female robots being operated by Japanese waitresses in skimpy bikinis!
Curious customers can even jump in and take the robot for themselves or if they’re feeling rich they can fork out 3,000 yen for a private one hour show!!!
Mentalists or geniuses!? Or a bit of both!?
http://www.trendhunter.com/trends/robot-restaurant#!/photos/166381/1

Personally I found it the most annoying advert on TV around the time of the Olympics but BT’s ‘Hola’ advert seems to have become the most memorable according to research by Neilsen. I found it terribly unconvincing and even cringey at times which made me want to turn over as soon as it came on. In second place was ‘McDonald’s Coca Cola’s Glasses Olympic Edition’ which again I didn’t think was great. My favourite had to be Coke’s advert featuring Mark Ronson and Katy B with that catchy anywhere in the world song; it always had me humming along when it came on.
http://www.campaignlive.co.uk/news/1148628/bt-ad-named-memorable-olympics/

SAVE US FROM SMARTPHONE SAVVY (Sarah)

To me, the question ‘are you addicted to your Smartphone’ is a ridiculous one – as in my mind it is clear that the answer from any Smartphone owners would be ‘of course’ accompanied by a slightly concerned look saying simultaneously ‘are you mentally ill’ and ‘why are we not conversing via whatsapp?’. Perhaps this is because I do not own a Smartphone (cue gasps of horror) but the results of a recent survey on Gazelle.com make me proud of this fact – especially when you consider that 15% of respondents said they would rather go without sex than live without their iPhone for a few days. Possibly worse is that 4% said they’ve used an iPhone during sex. I know which love affair I prefer. http://mashable.com/2012/09/05/addicted-smartphone/​

GOODBYE TO THE DEEP-FRIED MARSBAR? (Lewis)

Chocolate manufacturing giant Mars has distanced itself from the famous deep-fried Mars bar by seeking a disclaimer, after refusing to support it due to its commitment to healthy living. The Carron Fish Bar in Stonehaven, in Aberdeenshire, claims to be the birthplace of the recipe almost two decades ago, and will put up the disclaimer in the chip shop pointing out that the deep-fried Mars bar is not endorsed by its makers.
The Scots seem to be associated with everything deep-fried, and it’s really no wonder. Deep-fried butter bombs covered in Irn Bru batter are available in one Edinburgh bar, or if you really have a sweet tooth, head to the Borders where during Easter Time you can indulge in an ‘Easter Special’, which involves battering a Cadbury’s Creme Egg and deep-frying it!
http://www.bbc.co.uk/news/uk-scotland-north-east-orkney-shetland-19487149 ​

Being half German, I’m always…let’s say interested about WWII. So, this story immediately caught my attention: A clothing shop named Hitler, with a swastika to dot the ‘i’, has been asked to choose a different store name. Apparently the name was given as a tribute to the shop owner’s grandfather, who was very ‘strict’. What he didn’t know though was the genocide and suffering associated with the name – or the offense it would cause to the local Jewish community. Still – it’s a risky, if offensive, way to bring attention to your product.
http://www.bbc.co.uk/news/world-asia-india-19481400