5 Nuggets Of Web Gold For Your Pleasure This Thursday 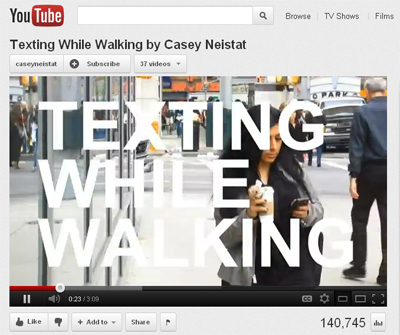 If you enjoyed today’s links or have any ideas for tomorrow’s offering, tweet us or write on our wall.

A documentary maker has taken on the problem of texting whilst walking with a short film explaining the textiquette of this perilous and inconsiderate activity.
On my daily commute, I often see people with total disregard for safety/manners and more than once, I have been painfully smacked into by these fools.
Not to say that I don’t do it occasionally, but I always make sure that I glance up every ten seconds or so (although this didn’t stop me walking into the glass screen of a bus stop last week…ouch)
Apparently it’s a huge problem in New York and so the city’s biggest newspaper, The New York Times commissioned filmmaker Casey Neistat to highlight the problem.
http://www.youtube.com/watch?v=pLA1UelcDrE&feature=player_embedded

PENGUIN SUITS A BIT OF ALL WHITE (Laura)

From my previous Holyrood Five posts you will gather that I really rather like Penguins, so when I came across these adorable pictures of an ‘albino’ penguin I had to go awww. The wee chap who was captured by naturalist David Stephens can be seen enjoying time with his regular coloured friends and he is a 1 in 146,000 phenomenon thanks to a condition called luecism which causes discoloration to the pigmentation. But while he may be cute, this white penguin unfortunately might not stand much of a chance in the wild without his black and white colouring as camouflage.
http://www.dailymail.co.uk/news/article-2091973/Theres-p-p-peculiar-Rare-white-penguin-spotted-Antarctica.html

NO STRINGS TO HOLD YOU DOWN…JUST HEAVY REGULATIONS (Lewis)

The dress code at the office here is pretty flexible. You come in looking smart and clean. If you have tattoos, piercings, Aimee’s wacky hair it’s allowed as long as it’s not too in your face. However, over at Disney, the place of fun and magic and child’s laughter it must feel like you are living under a nazi regime! Before you think I am being a bit over the top, check out this recent article from America talking about how if you have a tattoo you can’t be employed, you must have your hair a certain way which seems reasonable, but the one that got me was the you must keep your nail length to no longer than a quarter of an inch. So if you ever feel like getting a job with the cheery company, make sure you carry a ruler with you at all times.
http://www.thedailybeast.com/articles/2012/01/25/disney-parks-craziest-corporate-rules-beards-ok-tattoos-still-out.html

A CASE OF GETTING *TOO* CLOSE TO TECHNOLOGY (Scott)

Yes, tablet computers are the future.
Yes, the iPad has revolutionised my life in many ways and that’s why  I love it.
No, I won’t be rushing out to buy one of these rather disturbing devices.
http://www.metro.us/newyork/life/article/1079441–get-a-load-of-this-f-ing-ipad-case

Thought I’d be pretty blunt and obvious with the title because this link is exactly that-a kid’s slide which looks the exact replica of a penis! Completely mental and inappropriate but very entertaining.
Watch the way the children appear to bulge out the end and question whether it seems to be some sort of real life play out of reproduction! As for the weird music which is a rendition of the Queen Classic Bohemian Rhapsody-no idea!
http://www.youtube.com/watch?v=3tCu0JkN9nc