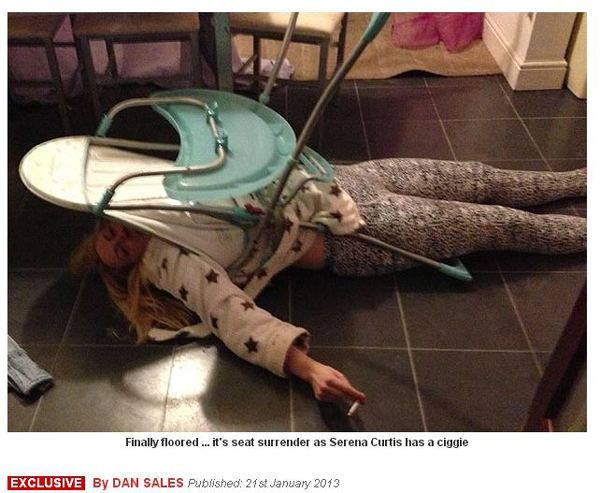 We’re always searching for the most laughable clips and stories to share with you all. So to keep up with our daily posts and social media escapades keep an eye on our Facebook and Twitter pages.

Why is it we always have the most ingenious ideas, once we’ve necked a couple bottles of wine? Firemen in Oxfordshire responded to an unusual call late last week when mum of three, Serena Curtis, got stuck in her son’s high chair. Serena managed to wedge herself into her kids’ seat following a girls’ night in with a couple of bottles. The tipsy mum tried for over an hour to free herself from the grips of the child’s chair, even stopping for a fag break, before calling in professional help. The Sun printed an assortment of side-splitting snaps featuring the embarrassed mum in a variety of different positions. If you’ve not already seen it, this will without doubt brighten up your Monday morning.
http://www.thesun.co.uk/sol/homepage/news/4754482/Fire-crew-called-to-save-tipsy-mum-after-she-gets-wedged-in-highchair.html​

In a highly competitive job market, you must set yourself apart. And what better way than to make an online resume which is so creative that it goes viral.
Philippe Dubost, a web product manager from France used his expertise to build an online CV in the style of an Amazon shopping page.
There is a feature to rate the product and as an explanation of why he has received rather a few one star reviews, Philippe blamed a long line of disgruntled ex-girlfriends.
After featuring on Mashable, Philippe has been unindated with emails and had to upgrade his server to deal with the increased levels of traffic.
A great example of a job seeker showing initiative – good luck to him.
http://www.phildub.com/

Sit back and get ready for a 90’s throw back this week from the comfort of your own home.
5IVE, Atomic Kitten, B*Witched, Liberty X, 911 and Honeyz, are all reuniting under one roof for, what can only be described as, a night of cheesey pop.
Dozens of “pop heroes” have decided to get back together on The Big Reunion in an attempt to return to their former glory.
The good news is, most of them seemed to have aged really well…and others. Well, here’s the link to judge for yourself.
So, if ya getting down baby, tune in Thursday to ITV2.
http://www.radiotimes.com/news/2013-01-07/atomic-kitten-are-whole-again-for-itv2s-the-big-reunion—pictures

More of a top recommendation for Monday’s hit in the form of science fiction-horror film, They Live.
Playing with themes of society control, it follows a drifter who discovers that the ruling classes are a posse of aliens after finding a box packed out with mysterious black shades which exposes their terrifying identity.
Packed with some over the top action scenes, this has become a bit of a cult classic and despite being made in 1988, its message still rings true today.
Maybe it explains why Hip Hop and R n B crotch grabbers insist on flashing shades no matter what hour it is. Would be pretty devastating to think N Dubz and Jason Derulo are one step ahead of the game.
http://www.youtube.com/watch?v=wR5ppqbIHx4

So with the awards season continuing, the stars were out in their full couture last night for the Screen Actors Guild Awards. I don’t know about anyone else but I do love this time of year as I get to peek on the fabulous fashions that grace the red carpet. My particular favourite from last night’s SAGS was Naomi Watt’s Marchesa dress. Almost a bridal look the dress was elegant and tailored to her fantastic figure. Something I wouldn’t mind wearing if I had the chance!
http://fashion.telegraph.co.uk/